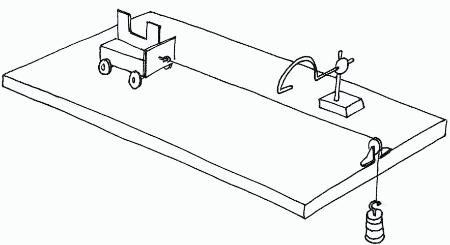 Pass a piece of string with a mass hanging on one end over a pulley. Attach the other end to the trolley so that, when the mass is released, it causes the trolley to accelerate. Choose a length of string such that the mass does not touch the ground until the trolley nearly reaches the pulley. Fix a 1 kg mass on the trolley with Blu-tack to make the total mass (trolley plus mass) of about 2 kg . This produces an acceleration which is not too aggressive when the maximum force (4 N) is applied.

The force is conveniently increased in 1 newton steps when slotted masses of 100 g are added. Place the unused slotted masses on the trolley. Transfer them to the slotted mass holder each time the accelerating force is increased. This ensures that the total mass experiencing acceleration remains constant throughout the experiment.

Fit a double segment black card on to the trolley. Clamp the light gate at a height which allows both segments of the card to interrupt the light beam when the trolley passes through the gate. Measure the width of each segment with a ruler, and enter the values into the software.

Connect the light gate via an interface to a computer running data-logging software. The program should be configured to obtain measurements of acceleration derived from the double interruptions of the light beam by the card.

The internal calculation within the program involves using the interruption times for the two segments to obtain two velocities. The difference between these, divided by the time between them, yields the acceleration.

A series of results is accumulated in a table. This should also include a column for the manual entry of values for force in newtons. It is informative to display successive measurements on a simple bar chart.

This experiment was safety-tested in November 2006

In Newton's analysis of motion, the relationship between the net force acting on a...

Demonstration or Class practical: This activity demonstrates that inertia depends on mass and not on any other interpretation...

Relationships between acceleration, force and ma...