A mass suspended on a spring will oscillate after being displaced. The period of oscillation is affected by the amount of mass and the stiffness of the spring. This experiment allows the period, displacement, velocity and acceleration to be investigated by datalogging the output from a motion sensor. It is an example of simple harmonic motion.

Unless the stand is very heavy, use a G-clamp to anchor it to the bench. 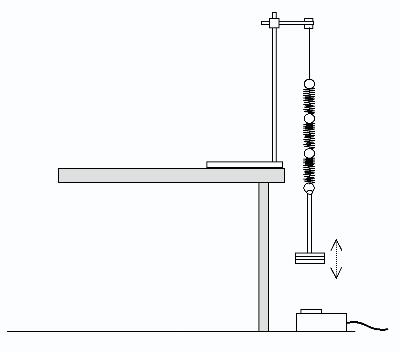 Suspend the spring from a clamp and attach a mass to the free end. Adjust the height of the clamp so that the mass is about 30 cm above the motion sensor, which faces upwards.

The clarity of measurements depends upon the choice of spring stiffness and mass. Good results can be obtained with three springs linked in series, and masses in the range 100 to 400 g. With this choice, it is necessary to place the sensor on the floor and allow the mass and spring to overhang the edge of the bench.

When the mass is displaced and released, its vertical motion is monitored by a motion sensor connected via an interface to a computer. In general, the magnitude of the initial displacement should not exceed the extension of the spring. It is best to lift the mass to displace it, rather than pull it down.

The mass may acquire a pendulum type of motion from side to side. Eliminate this by suspending the spring from a piece of string up to 30 cm.

For the collection and analysis of the data, data-logging software is required to run on the computer. Configure the program to measure the distance of the mass from the sensor, and to present the results as a graph of distance against time. Scale the vertical axis of the graph to match the amplitude of oscillation.

This experiment was safety-checked in May 2006

Oscillations with a particular pattern of speeds and accelerations occur commonly in...

A simple demonstration to introduce the idea of a pendulum using everyday objects.

Musical frequencies shown on a C.R.O.

Class practical: To show the similarities between S.H.M. and other oscillating systems.

Datalogging S.H.M. of a mass on a spring

Demonstration and Class practical: To demonstrate S.H.M. of a mass on a spring and gather accurate data using a datalogger.