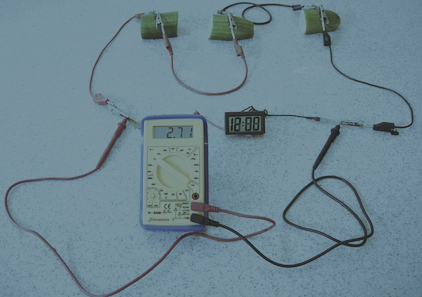 Safety note: Wear eye protection when piercing citrus fruit as fruit acid can irritate the eye. Do not eat any of the fruit at the end of the activity.

Note: an LED is a polarised component so must be connected the right way around in a circuit. The leg next to the flat section of the plastic body of the LED must be connected to the negative side of a cell. This leg is sometimes shorter than the other. Applying too much force where the legs meet the plastic casing will cause the legs to break off. Avoid this by bending the legs outwards, away from one another at the centre of each leg.

Take the chosen fruit or vegetable and embed one zinc and one copper electrode into it so that they're approximately 0.5 centimetre apart and pushed in approximately 2 cm deep. They shouldn't be touching inside the fruit. Repeat this process along the length of the fruit so that you have up to five cells, each separated by a few centimetres (the metals should alternate along the fruit).

Now get the multimeter and set it to read millivolt (on the 2000 milliVolt scale). Attach the positive lead to the outermost copper and the negative lead to the outermost zinc. You should say that this is a simple battery of cells. It has electrodes of different metals in acid (here we have fruit acids). Show the class that there is a potential difference (voltage reading) between the two outermost electrodes. Write this battery potential on the board (e.g. 1000 mV).

Remove the multimeter and connect the two outermost leads to the LED. Make sure that the positive terminal of the LED is connected to the copper.

Now, with the LED in place, measure the potential difference across the LED. Write it on the board (e.g. 800 mV).

Explain that if the potential difference measured across the LED is only 800 milliVolt (or 0.8 V) then this means that each coulomb of charge is shifting 0.8 joule of energy when flowing through the LED. Where is the other 0.2 J of energy being shifted to if not to the LED?

The cell will rise in temperature due to this energy shifting. Remind students that they may have noticed batteries that they use at home also get hot. Here the current is not very large, so if we stick a thermometer into the fruit we'll be disappointed.

For the next part we suggest a long fruit (e.g. cucumber), and just a cell, with two terminals only. The LED will not glow, but what's happening is otherwise much clearer.

Now look at the effect of increasing the amount of matter between the electrodes. Ask, What do you think will happen to the internal resistance of each cell? (It will increase as there is more matter for the charged particles to flow through.) Ask, Do you think the charge flowing in the battery will shift more or less energy as it flows through more matter? (More.) Ask: So will there be more or less energy shifted to the LED? (Less.) Ask, So will the LED be brighter or dimmer? (Dimmer.)

The batteries commonly used in school science practical work are torch batteries rated at 1.5 volt . If two of these batteries...

Class practical: finding an internal resistance of a supply from the power dissipated by a load resistance.

Internal resistance of a potato cell

Class practical: an introduction to the concept of internal resistance, using a more interesting example than a battery.