Intermediate stages in a process (energy chains and ladders)

This is the first of three posts about situations in which people are tempted to include intermediate stages as part of a chain in an energy analysis. These are sometimes called ‘ladders’ or ‘chains’. In these posts, I will explain why it is better to avoid them and how to do so.

This first post is an overview and I have expanded some of the examples in the following posts on HEP and circuits (like appendices).

Reasons why chains and ladders are unhelpful

When discussing how we represent energy at school, a question often comes up about the role of intermediate processes and whether they need to be included in an energy analysis. It is certainly the case that, historically, we have included them. And therefore, we are used to seeing them. But that does not mean that they are either required (for an energy discussion) or helpful.

In fact, I suggest the reverse is the case. In an energy analysis (for the whole process), intermediate, transient stores serve no useful purpose. In fact, they only complicate and confuse any discussions or activities – especially with younger students. And therefore, it is better to omit them.

Typical situations in which this question comes up are:

In teaching schemes and assessments of the recent past (using types and transformations in the way that it had come to be used), an analysis of each of the above would probably have included an intermediate ‘type’. For example:

(I have used inverted commas to signify terms that are best avoided).

Including these intermediates as part of a chain is compelling: partly because we are used to them; and partly because they appear to be important (or essential) to the operation and/or fundamental purpose of the device. However, these are not good reasons for doing so.

The role of energy

In all of the examples above, it is certainly the case that, in order to operate, a device has to get up to speed, reach a certain temperature or produce a sound. There are rich and interesting physics explanations about mechanisms of these on-going processes. They will include: moving masses, balanced forces, electric currents, temperature rise in resistors, hot wires radiating across the EM spectrum, vibrating diaphragms producing sound waves and so on.

However, trying to replicate the processes with a labelling exercise relating to energy does not shed any extra light on the phenomena or their processes. Instead, it introduces arbitrariness, confusion and ambiguity. Whilst also masking the underlying physics. Furthermore, it does not achieve any useful learning outcomes in terms of understanding or using energy; i.e. it does not prepare students for calculations or for having meaningful discussions about world energy resources.

In other words, including the intermediate stages is a distraction from the underlying physics without laying any helpful foundations for energy analyses. Therefore, such chains should be avoided.

Let’s see how this applies to the example of the rising mass.

A. The rising mass.

I’ll quickly define the situation. We use a clockwork motor (pre-wound) to lift a 100 g mass through 80 cm from the floor to the bench. The mass is attached to the motor by a light steel wire. Let’s say it takes 16 seconds.

Now, it clearly has to move in order for it to be lifted from the floor to the bench (as it happens, in this example, it moves at an average 5 cm/s).

In an old assessment item, given that it is moving, we might have expected a student to say that the energy story was something like:

Why is this chain of energy unhelpful?

This emergent chain of energy stages is a tell-tale sign that we are forcing energy into a role for which it is not fit. It is an attempt to replicate or mirror those processes and mechanisms with chains of energy stores (or types). And that is unhelpful. Here are some reasons why.

Including intermediate stores in a chain is:

These concerns have arisen by trying to describe an on-going process with an energy story that mirrors the description based on physical processes and mechanisms. And in doing so masks that physics. A more helpful approach is to analyse the journey in terms of forces and motion. And reserve the energy analysis for determining the change in the system between the beginning and end of the on-going process. i.e. to use start and end points – chosen in a way that keeps the discussion simple.

First let’s look at the mechanisms and processes for the rising mass:

In brief, the coiled spring in the motor exerts a force on the mass (bigger than the gravitational force). The unbalanced force gets the mass moving but, within a very short time, friction in the system balances the net upwards force and the mass reaches terminal velocity. It continues to be dragged up at a constant speed. All the while, the frictional forces cause the temperature of the gears and axle to rise a little and they, in turn, raise the temperature of the surroundings.

This discussion can be expanded, reduced, embellished, challenged and recast until there is an agreed version. Because it is based on physics rather than on different interpretations of labelling rules.

Trying for a more helpful and elegant energy story?

The first step is to choose start and end points. Let’s start at the point where the motor is fully wound and the mass is on the floor; and choose an end point when it has reached the top. This makes the energy story simpler, less confusing and (I hope) easier to reach agreement.

Between the start and end points:

If you are using the language of stores, then the phrasing becomes simpler again: 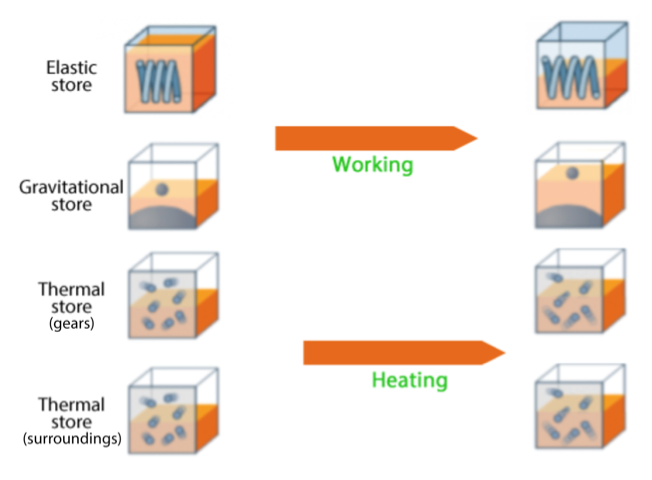 This approach does not require a change in the way that you represent energy (i.e. it is not imperative to talk about stores and pathways). However, it works well if you do so. And then choose start and end points that make the story simple and allow you to make the point(s) that you would like to make without getting bogged down in filling in gaps.

I have gone into some of the examples (HEP and circuits) in more detail in the following posts.

Also it is always worth checking out the SPT resources on energy.

Class practical: This impressive demonstration shows how easily the crystal comes apart if the blade is accurately aimed...

Historic and pre-historic energy use

A paper has estimated the power output of a single Norman water mill as around 1.3 kW and, using the number of mills listed in...

You often read that “Energy is what makes things happen”. But you need to be careful to think a bit before you say it.

Many students attribute macroscopic properties like hot and cold, melting, or expanding to particles (or to atoms, molecules) when using a particulate model to explain thermal phenomena