Using a dynamics trolley on a steep ramp, where the energy transfer is not easily measured.

It is important to have the board supports very stable so that the system cannot collapse as students gather round it to watch. A trolley catcher might also be required.

Clamp one end of the strip of hardboard to the bench-top. Raise the other end about 0.75 cm and rest it on two 1.25 lengths of angle iron (Handy Angle or Dexion, used in rack storage systems). Clamp the board to the bench again about halfway along its length as in the diagram. This arrangement needs to be very secure.

Cut a vertical slit, not more than 1 cm wide, in the middle of the board. Pass a cord through the slit without touching the hardboard and, keeping it parallel to the bench-top, pass it over a pulley secured to the edge of the bench. Tie a loop (about 1/2 m long) in the end of the cord that goes through the slit. Pass the other end over the pulley and fasten it to a 1 kg mass. Hang the loop loosely over two bent posts as shown. The part of the loop that is not suspended between the posts should lie flat on the board (so that the trolley can run over it).

A dynamics trolley with a single peg in the top is released from the top of the ramp, with the single wheel end leading, and the single peg at the rear. The peg engages the loop after the trolley has run over those parts of the loop that are on the board. The trolley is brought to rest, raising the 1 kg mass.

Before you release the trolley, check that its leading end will pass under the raised part of the loop, so that the loop may be engaged by the peg.

Have the minimum of slack string between the slit and the mass, so that the mass starts to rise as soon as the loop is engaged. 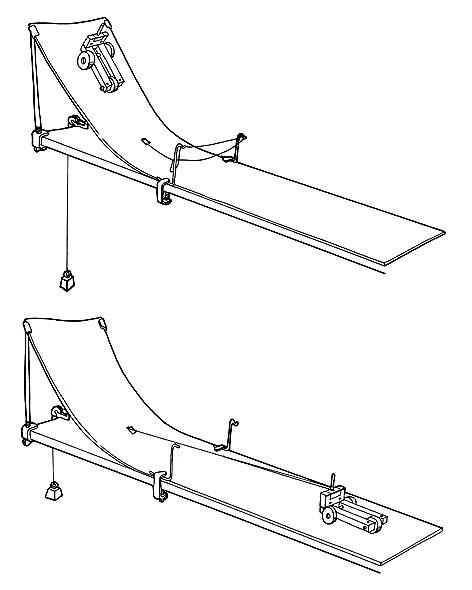 Experiments in this collection introduce the SI unit for energy measurement (the...

A trolley started and stopped by catapults

Demonstration: Collisions between trolleys that result in energy being dissipated to the surroundings.

Demonstration: Introducing the concept of conservation of energy and a definition of the joule.

is used in analyses relating to Engines
2023 IOP Awards