In this demonstration students observe oil floating on water and ice floating on oil. You can use it to test understanding of density. 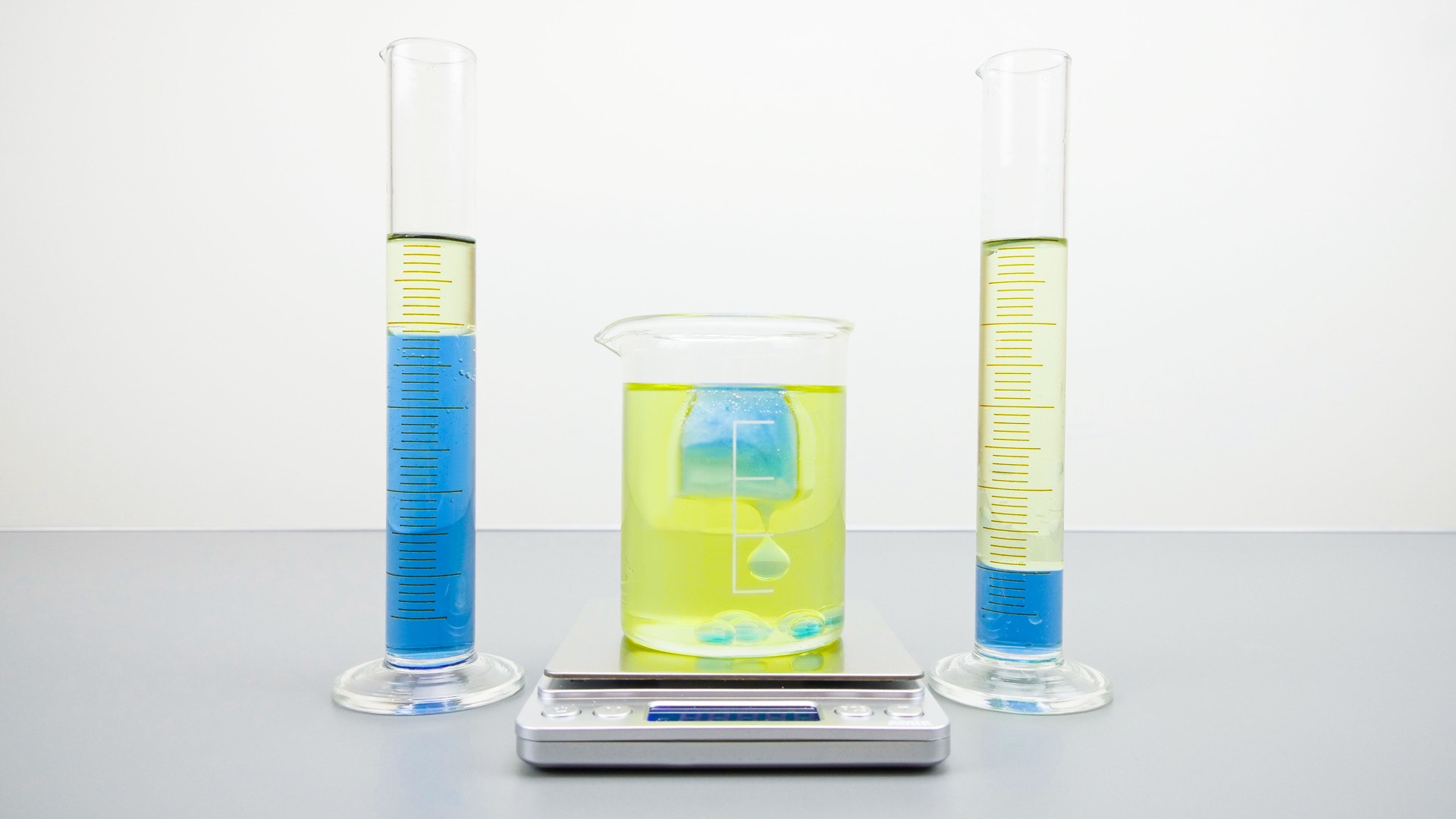 The night before the activity prepare blue ice cubes by adding a few drops of food colouring to water in an ice-cube tray and freezing. The blue food dye will make it easier for the students to distinguish the ice and resulting meltwater from the oil.

When carrying out the activity avoid getting oil on the bench or floor where it may cause a slipping hazard. Afterwards, dispose of the oil in the non-recycling waste by putting an absorbent material (e.g. newspaper or cat litter) into a strong bin bag and pouring the top layer of oil from the cylinders and beaker into the bag. The remaining coloured water can be washed down the sink with the tap running.

Students may talk about ice and water being lighter or heavier than oil. Encourage them to think in terms of the density of these materials. Some may think that the mass or volume of an individual ice cube is important, show them this isn’t the case by floating both large and small ones in the beaker.

In both measuring cylinders the water settles at the bottom because it has a higher density than oil. The oil-water mixtures have the same volume, but the one with a greater percentage of water will have the larger mass because water contributes more mass per volume than oil. Confirm this by putting each measuring cylinder in turn on a balance (the mass difference should be about 3g).

The ice floats on the oil because it’s less dense than oil. When it melts, it turns to water and so we would expect it to sink. If they look at the beaker, they can confirm this. Blue water droplets are detaching from the bottom of the ice cube, dropping through the oil and collecting at the bottom of the beaker (if the ice cubes haven’t started melting use a ruler to submerge them to speed up the process).

During the change of state the mass doesn’t change (the reading on the balance under the beaker remains constant). The increase in density must be due to a decrease in volume. The molecules must pack more closely together when the ice melts (water is very unusual in this regard as most solid substances are denser than when they’re liquid).

Students describe density changes during a change of state in terms of a rearrangement of the molecules.

Expansion of water on freezing

Demonstration: The expansion of water when it freezes breaks an iron bottle.

Class practical: looking for crystalline structures in each specimen.

The separation of molecules in a gas

As a crude picture that will lead to a rough estimate, assume that each molecule in a liquid occupies a cubical box of side, d...

Many students have difficulty explaining why the temperature of a sample of a substance remains constant during a change of state, even though it is being continually heated or allowed to cool

can be analysed using the quantity Energy
2023 IOP Awards