Hill diagram as a model for potential difference 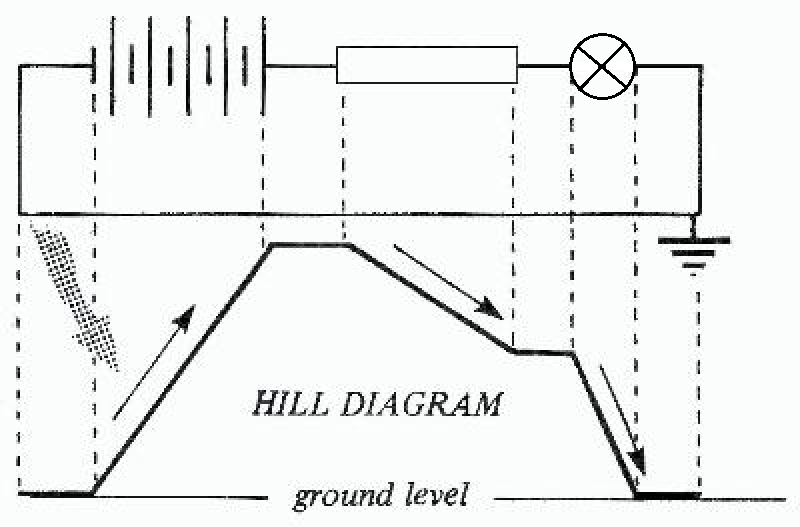 You can draw a hill diagram showing how the battery 'pushes a coulomb of charge up' so that it can then run down the various hills to the bottom on its way round the circuit. The coulomb does not really have joules like bottles in a rucksack. The coulomb is pushed by electric forces generated by the battery. Those forces grip it wherever it is in the circuit and drive it on round. Energy stored chemically is transferred to the components.

You might picture a 6 volt battery giving 6 joules to every coulomb with instructions ‘remember to spend all this energy on your way round the circuit and then you will get another load of 6 joules for the next round’.

In a way the battery is like a moving ramp such as the machine used to raise gravel to the top of the tower for sorting it, or like an escalator for people. It raises electric charge, measured in coulombs, uphill to a higher level of electrical potential. Then as the electric charge travels round the rest of the circuit it is running downhill, warming up the filament of the lamp as it makes collisions of some kind in the filament. The connecting wires are assumed to have almost no resistance and so the coulomb just rolls along without transferring any energy.

What is it that a voltmeter measures? These experiments will help students to...

Having demonstrated what is involved in measuring voltages, the pupils are now given the opportunity to make some measurements...

First of all, attention is focused on introducing what is meant by voltage. It is important that pupils have an understanding...