Henri Becquerel discovered radioactivity in 1896. Fortunately, he kept a detailed diary of his experiments. This shows that the frequent claim that his discovery was a chance event misrepresents his systematic approach to experimentation.

One approach to this topic might be to act out Becquerel’s sequence of experiments, with lumps of (non-radioactive) rocks and ready-made ‘photographic films’ to show his results. His diary entries would act as a script.

Ask students to explain the design of experiments, and the results, and to suggest the next step.

Becquerel was interested in phosphorescence. After exposure to visible light (or other radiation), some materials glow. The glowing fades gradually. His father and grandfather had both worked in this field since the 1830s.

Henri had some crystals of substances containing uranium. They glowed in the dark, without showing signs of fading.

Question: How do ‘glow-in-the-dark’ stars work?

Answer: Stick them to a bedroom ceiling; during the day, they are exposed to light. At night, they glow. Their brightness decreases over time.

Experiment: In a darkened room, show how a cathode ray tube screen (TV or oscilloscope) fades after switching off.

Question: Sketch a graph to represent this.

Question: Use ideas about energy to describe what is going on.

Answer: Radiation (light, electron beams, etc.) transfers energy to the material. The energy is stored, and released more and more slowly. Of course, the energy is being released even during the irradiation; the material doesn’t wait until dark before starting to glow, but you cannot see it in daylight.

I took two crystals of potassium uranium sulfate and left them in the sunlight for several hours. Then I placed them, with a coin, on top of a photographic plate. My prediction was that the plate would be blackened by the light from the glowing salts. The coin would block the light from part of the plate.

When I developed the plate, I could see the outline of the crystals and the shadow of the coin. My prediction has been proved correct.

I was worried that perhaps chemicals from the uranium had been affecting the plate. Accordingly, I repeated the experiment, this time with a thin sheet of paper between the crystals and the plate to prevent chemical contamination. When I developed the plate, I saw the same effect as before. 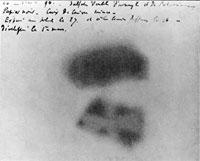 One of the plates used by Henri Becquerel in his experiment.

Note how Becquerel explains the design of his experiment, makes a prediction, and tests it. Then he tests an alternative idea.

I wanted to repeat my experiment with the uranium salts. I set the crystals on fresh photographic plates by the window, but it was a dull day. No sunshine. I put the plate away, and tried again the next day. Still no sunshine.

On 1 March, I decided to develop these plates, expecting to find the images very feeble. On the contrary, the plates were blackened with great intensity.

This made me think that the crystals might be able to affect the plates without exposure to sunlight. Perhaps the action could even take place in darkness. This gave me an idea for another experiment.

In popular accounts of Becquerel’s work, it is often suggested that he unaccountably developed some plates which had been left in a drawer with uranium-containing rocks. There was an element of luck in his discovery, but each step in his work is logical and understandable. By this stage, Becquerel had made his vital observation and was ready to explore it systematically.

I then placed all three in the dark for several hours. When I developed the plates, I found these results:

I am now convinced that uranium salts produce invisible radiation, even when they have been kept in the dark. They do not need to be exposed to sunlight to produce this effect.

X-rays had been discovered in 1895 by Wilhelm Röntgen. They had been exploited very rapidly. Invisible radiations were suddenly of great interest. This greatly encouraged Becquerel to press on with his work.

Question: What other invisible radiations were known in 1896? Which have been discovered since?

I have kept uranium crystals in the dark for 160 hours. There is no sign of any decrease in the intensity of the radiation which they produce.

Becquerel went on to investigate a number of uranium compounds, as crystals, liquids and solutions. All produced invisible radiation, suggesting that it was the presence of uranium which was necessary to produce the effects observed. Metallic uranium had the greatest effect.

He also showed that the radiation removed the charge on a body charged with static electricity.

The idea that an element such as uranium can produce radiation continuously, without any obvious source, is a hard one to accept – it appears to break the principle of conservation of energy (see guidance note on this). (Phosphorescence, on the other hand, clearly does not, as exposure to sunlight is needed to ‘charge up’ a phosphorescent material.) However, Becquerel’s experiments convinced him that he had indeed observed a radically-different phenomenon.

Question: Compare the phenomena of phosphorescence and radioactivity. What are their similarities and differences?

Similarities: Release of radiation, decay over time (although Becquerel couldn’t observe this with uranium).

Around the same time, in the USA, Sylvanus P Thompson noticed that uranium salts blackened photographic plates. In Scotland, Lord Kelvin reported that uranium could discharge static electricity. However, neither carried out a systematic study like that of Becquerel, which is why he is credited with the discovery of radioactivity.

On the evening of 1st March 1896, Becquerel gave his first report to a meeting of colleagues in Paris. At the same time, Kelvin was reporting his findings to a meeting in Edinburgh. Scientists rarely work in isolation on a topic which only they are interested in. There is often a tension between reporting in public on what you have discovered (which may help your competitors), and keeping your findings secret (which may mean that they get their report out first, and can then claim the credit).

This case study is based on a unit of work in Henri Becquerel and the Discovery of Radioactivity, by D Sang, J Sutcliffe and M Whitehouse, Association for Science Education, 1997, ISBN 086357 2707.

Other resources onEnergy Transferred by Radiation

Class practical: Using the hand as a detector to compare the absorption of infra-red radiation.

Class practical: A simple comparison of the infra-red radiation from two Bunsen flames.

Conduction is the way in which energy is transferred (through heating by contact) from a hot body to a cooler one (or from the...