In the 1970s, electrostatically generated sparks caused a number of explosions at grain elevators, large facilities designed to store grain. An article in New Scientist in 1978 reported that grain elevator explosions had killed 50 people in the United States and that researchers at the University of Southampton had constructed two laboratory-sized silos to investigate the build-up of charge. 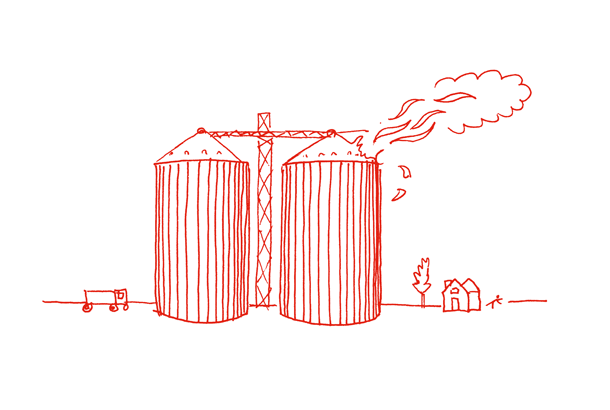 The phenomenon arises because fine powders, such as flour, can acquire a charge as they pass along a pipe. They then discharge to the walls of the silo, causing a spark. A charge as low as 10 -3 C may be sufficient to create a spark that can transfer 1 mJ. This is enough to have a devastating effect in a highly flammable atmosphere of air rich in flour particles.

The risk can be mitigated by using dischargers: either passive needles placed along a pipe to allow excess charge to flow off, or active dischargers which use a power supply to deliver an appropriate current to eliminate undesirable charge.

A sequence to develop ideas about simple electri...

Electrical loops are rather pervasive, as they are such a convenient way of getting jobs done. That's because electrical loops...

The tinsel will touch the balloon, be repelled and start floating! Use the balloon to direct where it goes. If your UFO won’t...

We suggest that you use parts of the circuits here to allow your class to concentrate on two aspects of the behaviour of...

Some students may conflate 'charge' with 'a charged particle'