Getting your hooks into Hooke

Robert Hooke is immortalised in his eponymous law. However, he made at least two errors in its application. First, he appears to have believed the relationship between force and extension held for compressing gases. Second, Hooke seems not to have been aware of the concept of elastic limit.

Thomas Young was the first person to describe the elastic limit, though he didn’t use the term. He wrote: “A permanent alteration of form is most perceptible in such substances as are most destitute of rigidity, and approach most of the nature of fluids. It limits the strength of materials, with regard to practical purposes, almost as much as fracture…”

Hooke’s health
Though several aspects of Hooke’s life are debated by historians, there is a consensus on Hooke’s ‘wretched’ appearance. He was described as “of motley, middling stature, somewhat crook’d, pale-faced, his face but little below his large head, his eyes full, grey, popping and not quick”. Hooke suffered from a long list of ailments during his life including “catarrh, terrible headaches, back pain, skin disorders, blisters and boils, worms, indigestion, in-growing toenails and the most gruesome nightmares” for which he tried a range of different contemporary treatments including cupping and blood-letting. He took pills containing senna, rhubarb, iron, mercury, laudanum and sulphur. His colleague, Robert Boyle, suggested blowing powdered human faeces into his eyes as a remedy. Given his appearance and ailments, one can see why Samuel Pepys wrote, after meeting the scientist in 1665: “Hooke is the most, but promises the least of any man in the world that I ever laid eyes upon.”

Breathing in a vacuum   Hooke became interested in the newly discovered vacuum and used an air pump to personally investigate its properties. Contemporary scientists were fascinated by the effects of vacuums on living creatures. A Danish visitor was inspired to write a verse commemorating a graphic demonstration at the Royal Society:

To the Danish Agent late was showne,
That where noe Ayre is, there’s noe
breath. A glasse this secret did make
knowne Where in a Catt was put to
death. Out of the glass the Ayre
being screwed, Pusse died, and ne’re
so much as mewed.

For Hooke, the natural progression from animal experimentation was studying the effects of the vacuum on a human subject. In 1671, he constructed a device formed of two barrels, one inside the other, with the outer barrel filled with water to resist the vacuum in the inner chamber. The tops of the barrels were sealed with cement and a valve fitted to the inner chamber so that the subject could control the flow of air to the pump. He demonstrated the barrel experiment in his home to avoid damaging it in transit. Whilst Hooke sat in the decompression chamber, about a tenth of the volume of air was pumped out of the inner barrel for a period of 15 minutes. Apart from popped ears and some loss of hearing, Hooke reported no discomfort during the experiment. 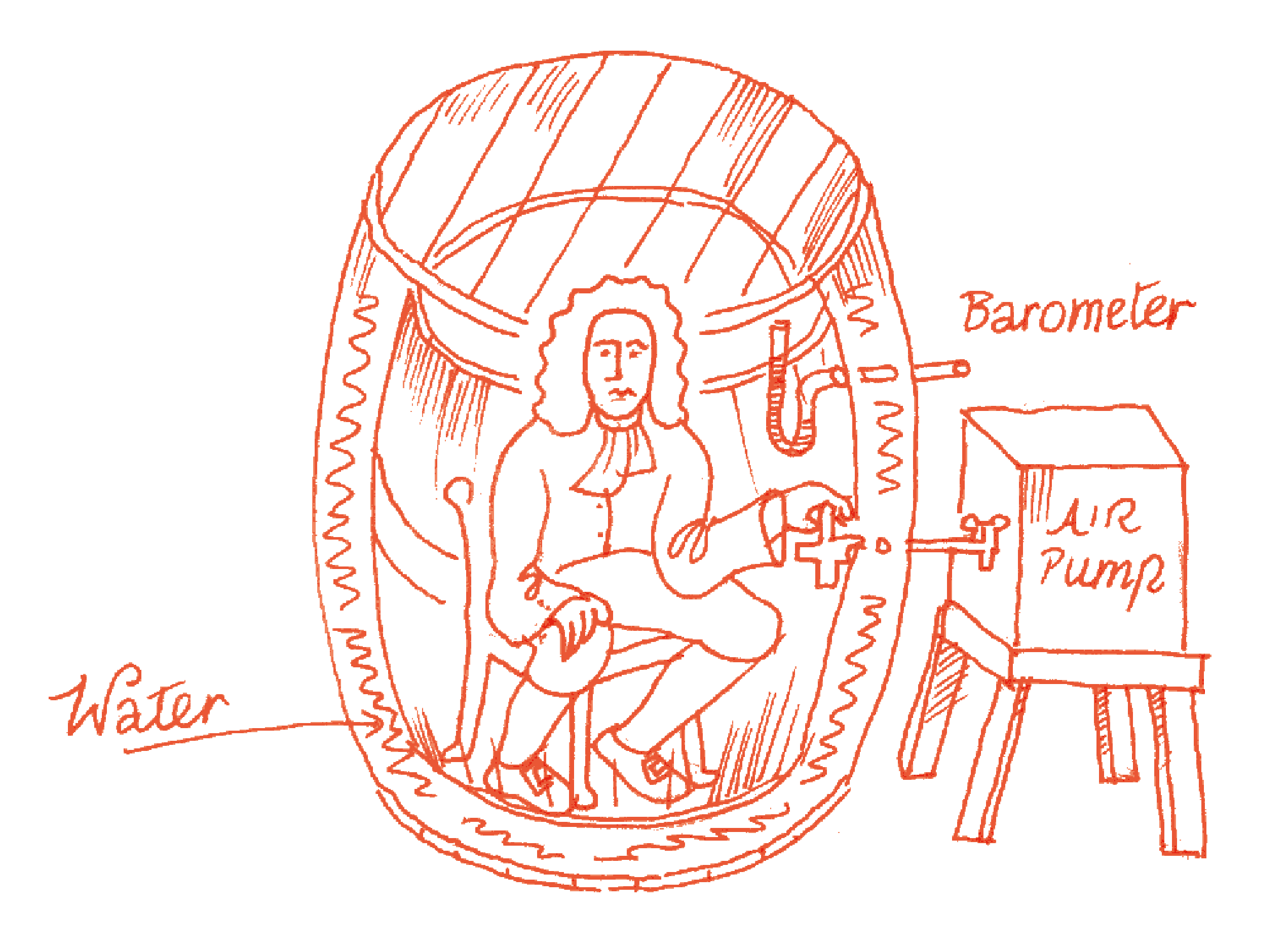 Artificial canine respiration
One of Hooke’s most gruesome experiments was carried out to settle a contemporary debate about the function of the lungs. Some of his peers believed that the motion of the lungs drove the circulation of blood and so their motion was necessary for life. Others argued that air was the essential component. In a demonstration performed in front of members of the Royal Society, a dog’s windpipe was cut and bellows inserted into the hole so that air could be pumped into the unfortunate animal’s lungs. During the cruel experiment, the dog’s lungs were exposed so that the audience could observe their motion. Hooke has therefore been cited as an early pioneer of artificial respirators.

He repeated the demonstration using two sets of bellows to keep another dog’s lungs fully inflated but stationary, by cutting a hole in the pleural membrane. Even though the dog’s lungs remained unmoving, its heart continued to beat indicating that the motion of the lungs was not essential for circulation.

Hooke’s Monumental contribution to London
In addition to his scientific research, Hooke worked as an architect. Following the Great Fire of London, he submitted a plan for the rebuilding of the city that consisted of a grid layout with vast market squares. With Christopher Wren, Hooke co-designed the Greenwich Royal Observatory and the Monument. However, for Hooke, the Monument was more than a simple memorial to the Great Fire. He designed each step of the staircase to be exactly six inches high so that he could investigate the relationship between air pressure and altitude. He also planned to use the Monument as a 61 m telescope, by fitting lenses in an underground chamber and at the top of the column. However, vibrations from passing traffic and the movement of air within the column prevented Hooke from being able to take the sensitive parallax readings he had intended to record. 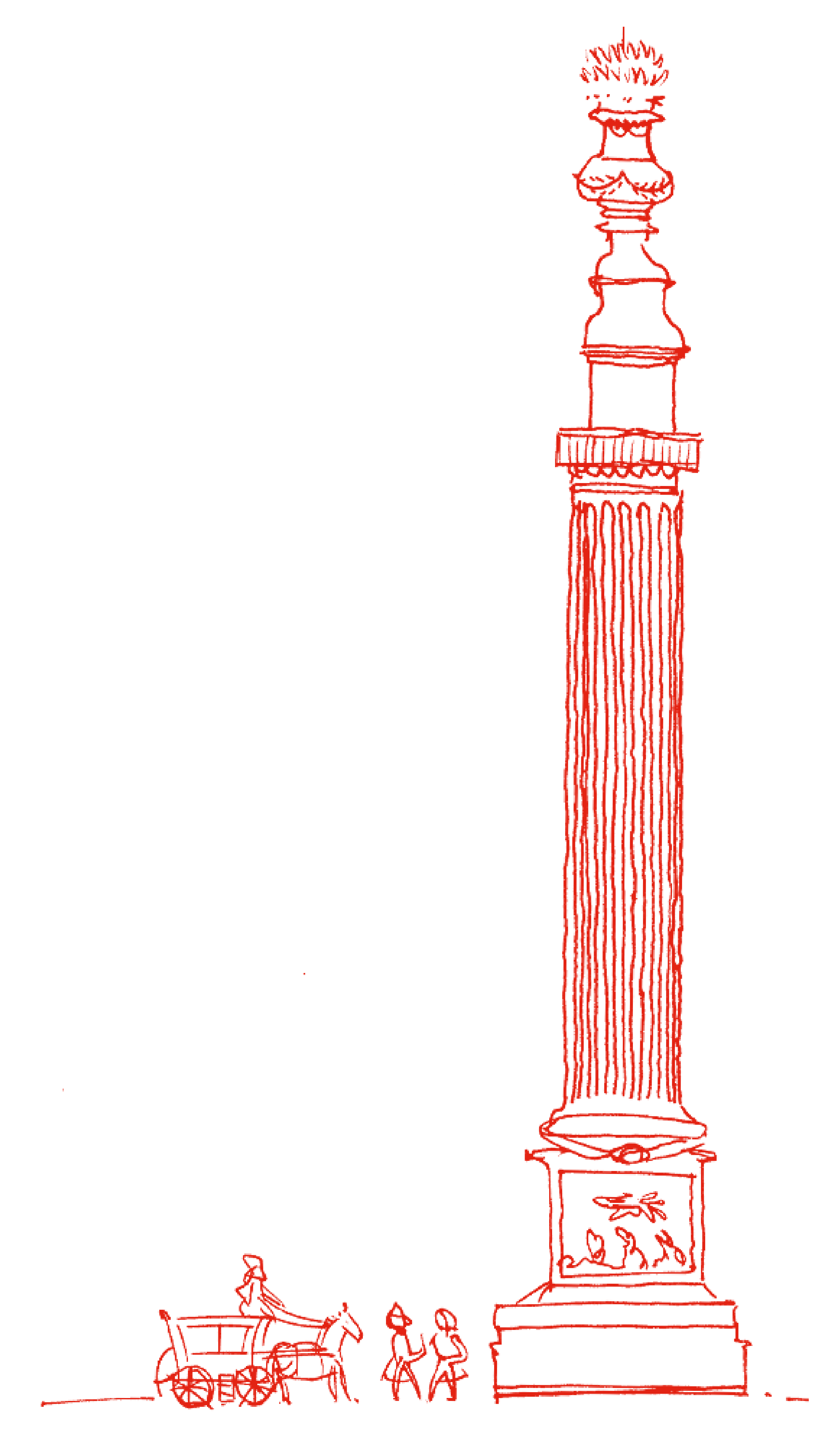 Hooke’s claim to the inverse square law
Hooke may have a claim to the co-discovery of the inverse square law of gravitation. He wrote to Newton in 1680 explaining his idea that the motion of the planets was due to a perpendicular attraction. In a subsequent letter, Hooke raised the possibility of an inverse square relationship between gravitational attraction and distance. To simulate planetary motion, Hooke developed a demonstration in which the oscillations of a conical pendulum (a simple pendulum tracing out a circle rather than a line) were projected onto a perpendicular surface. He added a smaller pendulum to the wire of the conical pendulum to simulate the motion of a satellite.

However, historians of science report that the inverse square relationship was, by the late 1660s, well known and had been described by a number of writers. Newton described the inverse square law in his 1687 Principia and, whilst he acknowledged Hooke’s contribution to his work (but only after encouragement from Halley), he downplayed its significance. Hooke was not mollified by this acknowledgement and never forgave Newton for his perceived plagiarism.

Hooke the polymath
Hooke’s research interests were wide-ranging. He experimented with model ornithopters (machines that fly by flapping wings) and made observations with a telescope that led him to conclude that the Moon “seems to be some very fruitful place, that is, to have its surface all covered over with some kinds of vegetable substances”.

Hooke is also notable for the remarkable illustrations that he used in his works, including those of objects he observed through his microscope. He reports that, when attempting to observe an ant, he initially struggled to “think of a way to make it suffer its body to ly quiet in a natural posture”. He came up with a novel solution to the problem:

I made choice of the tallest grown among them, and separating it from the
rest, I gave it a Gill of Brandy, or Spirit of Wine, which after a while e’en
knock’d him down dead drunk, so that he became moveless… and after l had
taken it out [of the alcohol], and put its body and legs in a natural posture,
remained moveless about an hour.

Hooke made a number of contributions to watchmaking. He is reported to have invented the anchor escapement used in pendulum clocks and the watch balance spring. Though his technological attention to detail was impressive, his focus on other people could be more careless. Whilst working on horological projects, Hooke collaborated with the watchmaker Thomas Tompion but in his writing repeatedly referred to the craftsman as ‘Tomkins’.

Many university materials science departments are happy to provide access to their facilities to give students the experience...

A selection of experiments that are suitable to use remotely with your students.

A range of websites and resources containing useful questions for students on properties of matter.