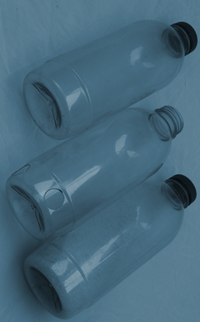 The purpose of this activity is to guide pupils through a sequence of first hand experiences that enable them to make sense of floating and sinking. Floating and sinking are related to the resultant of gravity and buoyancy forces acting on an object, to the weight of the object, and to the volume of water displaced by the object.

Invite pupils to take the sealed bottle to gently push it into the water.

Teacher: How much do you have to push down on the bottle to make a hole in the water? How does that force you exert depend on the size of the hole?

Teacher: What will happen if you try with a bottle that does not push the water out of the way, so not making a hole?

Now try with the doctored bottle, that does not make such a hole. Now gentle pushing will not result in a buoyancy force. Whatever the position of the bottle, the buoyancy force is zero.

Teacher: The first bottle is more like a boat – the second a boat that'll never float. But now let's have a boat that's partly loaded.

Try with an open topped bottle, about a quarter full of coloured water. This'll weigh more as it's carrying water – a water ballasted boat.

Teacher: How far into the water did the bottle go when you allowed it to find its own height? What force did you have to exert on the bottle to make it flow higher?… and lower?

Now try again replacing the water in the bottle with a stone that is less heavy than the water.

Teacher: Can you predict how deeply the bottle will float now? What about with a stone that is less heavy than the water?

Draw out the conclusions at a level of detail and precision appropriate to the class. It might be possible to measure the volume of water displaced (the hole made by the bottle) and relate it to the stone's mass – but it may not be useful to do so.

Once you've had a bit of practice, the cups will soon be looping in the air. This is because elastic makes the cups spin...

These short experiments, using simple apparatus, can be used to explore understanding of the inertia of objects, providing...

George Gamow relates a prank carried out by the French physicist, Jean Perrin. Perrin is reported to have packed a running...