Flask model of the Pythagorean system

Using the celestial sphere apparatus to model the Pythagorean system. 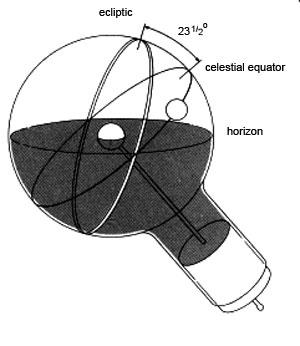 Take normal care with glassware. Keep the model out of sunlight as flask and water can act as a convex lens and produce localised heating. 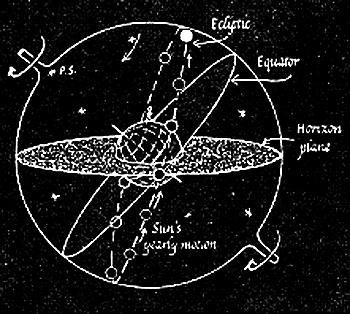 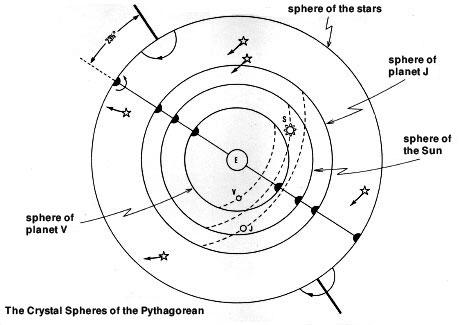 Pythagoras (about 530 BC) developed a more complex model than Thales' model. The Pythagorian School accepted that the Earth was a sphere. The stars and planets were imagined to sit on an imagined scheme of concentric spheres, like shells of an onion, the Crystal Spheres. The outermost spheres carried the stars with the daily motion. Inside were other spheres, each carrying a planet. Starting from the outermost, they were in this order:

In later stages, this model of celestial spheres had all the inner spheres attached to the outermost one, which carried them round with the 24-hour motion. Then the Sun's sphere revolved backwards once a year about an axis on the ecliptic. The spheres for the Moon and other planets all revolved slowly backwards about the same axis; one revolution a month for the Moon; one revolution in 12 years for Jupiter. This model imitated the motions of the Sun and Moon fairly well but gave only the general motions of the planets, without their retrograde loops.

Early ideas about the solar system

The history of how our view of the heavens changed is fascinating. This is a reconstruction, identifying some salient points...

From the very small to the very big

Experiencing different scales. To allow pupils the opportunity to visualise the really big and small. To see if pupils can...

An epicycle system for planets