How to detect ionising radiations 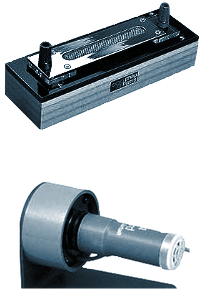 Both photons and particles can shift enough energy to to convert the absorber atoms to ions. Detect these ions and you'll have a way of detecting the radiation. Atoms are neutral and ions are not, so exploit the newly made charged particles by constructing a detector around a carefully arranged absorber.

To make sparks, accelerate the ions (arrange for an electric force to be acting on them) and allow these ions to accumulate a large speed before striking another atom (so keep the atoms far apart – make the absorber a gas). This target atom is in turn ionised (it's struck by a fast-moving charged particle – a familiar process). Allow the cascade to continue. When enough ions are moving you'll have a spark.

To make clouds, arrange the absorber to be a very wet atmosphere, where the slightest disturbance will produce a cloud. The ions provide that disturbance, as the surrounding molecules are attracted to the charged particles, which form condensation nuclei – the small disturbances necessary for the droplets that make up clouds. Jet contrails on a clear day are perhaps the most visible example of disturbances producing a cloud, although these are sudden changes in pressure, not trails of ions.

Different detectors have different advantages (and so comparative disadvantages)

Making clouds shows you where the particles have been – it reveals their paths. These are cloud chambers, and they retain a usefully physical link to the events that caused the cloud. It's easy to imagine the small charged particles tracking through the absorber and leaving a trail of ionised atoms in their wake. Bubble chambers were a development that followed the same principles, but with higher resolution, but they have in turn been superseded by techniques that can more easily dump the large quantity of data now generated by studies of ionising radiations into a computer for preliminary analysis. Bubble chamber photographs had to be hand traced. Also, finding the beam activity from these trails is hard work, because you have to count the trails.

Spark counters developed into (sealed) Geiger–Müller tubes, which are probably what you use to detect radiation in a school laboratory. They are good for counting, but you need an array of such spark counters to see the path the particle took.

For both kinds of detector it is unwise to assume that all kinds of radiation will be detected equally. Gamma does not make enough ions per millimetre to make clouds, and Geiger–Müller tubes may only detect 1 in every 10 000 that pass through the tube. Alpha radiation makes so many ions per millimetre that the walls of the Geiger–Müller tube may absorb all the alpha radiation before it reaches the gas molecules that the design relies on them ionising. As with many measurements in physics, skill, care and perseverance is needed to ensure that you have measured what you thought you had.

Demonstration: displays of cloud chamber photographs are very worthwhile as a focus for discussion. As well as the straight...

Class practical: the Taylor diffusion cloud chamber is a simple piece of equipment which will clearly show alpha particle...

Now that your students are familiar with different types of radiation, you can look at the processes by which they are emitted...