This is a useful demonstration to introduce students to what they can expect to see in the diffusion cloud chamber, and possibly to see forked paths resulting from collisions.

The radioactive sources supplied with some expansion cloud chambers screw into the base of the chamber and are moderately strong. Handle them with large forceps or pliers.

Various types of expansion cloud-chamber are available commercially. They differ greatly in effectiveness and clarity for small groups of students so it's advisable to try before buying. Much depends on the illumination. Some require alcohol, but those which work with water are preferable.

The above diagrams show a Princeton University design used (i) for a few students viewing directly; or (ii) for projecting a large image by an overhead projector. 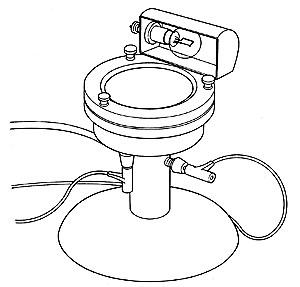 The above diagram shows another design.

All types need an electric field to sweep away ions left by earlier events. In each case the manufacturer's instructions should be followed carefully.

Expansion cloud chambers are relatively expensive so schools are unlikely to have more than one.

By contrast, the Taylor diffusion cloud chamber is inexpensive and can be used for class experiments. Also, it maintains a constant state of supersaturation:

Momentum, a vector quantity, is conserved in interactions such as collisions and...

This episode introduces the ubiquitous nature of radioactivity, and considers its detection. It draws on students’ previous...

Alpha particle tracks including a collision with...

Alpha particle tracks in wet helium. One collided with a helium nucleus. After the collision, the two tracks are at 90° to...