Estimate of acceleration due to gravity using pulsed water drops

This experiment is one of the most delightful demonstrations in physics and well worth the effort of assembling the equipment.

Avoid setting the frequency of the stroboscope near 8 Hz as the flashing light may induce an epileptic fit. 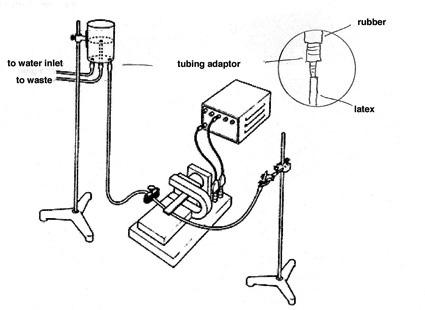 Set up the apparatus as shown.

This experiment depends mainly on having a good jet. It is easy to draw a glass tube into a jet by heating it in a strong Bunsen flame. The jet is then cut at a point about 2 mm diameter and the end is smoothed by putting it back into the flame for a few seconds. Take care that you do not seal it up. If the stream breaks up into several streams; or fails to break up into drops then other jets should be tried until a good one is found.

Water from a constant pressure supply flows through a rubber tube to the glass jet. Use a Hoffman clip to reduce the flow to a small stream. At the end of the tube there is a short piece of glass tubing drawn out into a jet. The height of the constant pressure supply should be up to 1 m above the jet. Adjust the Hoffman clip so that if the stream is directed vertically upward it rises to a height of 15 cm to 30 cm above the jet.

You may want to adjust the flow rate with a Hoffman clip to a suitable value.

Photograph of pearls in air and their shadow. Photograph courtesy of Brenda Jennison.

This experiment was safety-tested in February 2006

Forces and their effects can be superimposed. The path of any projectile combines...

Demonstration: this is a useful demonstration to introduce students to what they can expect to see in the diffusion cloud...

In 1537, Nicolò Tartaglia, an Italian mathematician, published Nova Scientia, a work that has subsequently been recognised as...

Momentum interchanges with other objects

is a special case of Uniformly Accelerated Motion
IOP 2022 Awards