What we know about the universe comes from observations which rely on the radiation and (to a lesser degree) particles which reach us on Earth. 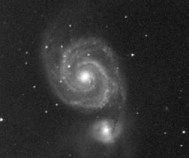 Discussion: What is astronomy?

Students will have heard of several different terms that you want to disentangle at the start:

Naked eye observation of the night sky can reveal up to 8000 objects, mostly stars, the Moon and various nebulae. On closer inspection the nebulae are either diffuse dust clouds or galaxies that have a definite shape (spiral, elliptical etc). Repeated observation reveals the wandering stars now known as the planets (5 are visible to the naked eye). If you are lucky you may observe the odd comet.

Because the speed of light is finite and we see all the light entering our eye at the same time, the further away its source, the father back in time it is being observed.

Find out what your students already know (or think they know) by asking them to assess a number of statements about astronomy.

Discussion: How do we know?

All our information about astronomical objects in the Universe beyond our solar system is gleaned by analyzing the electromagnetic radiation they emit or absorb. Visible light is of course a small part of the total spectrum. A useful analogy is a fraction of an octave compared to the range of a concert grand piano.

Temperature, relative speed to Earth, rate of spin, orbital speed (and hence mass), and what they are made from can all be deduced by analysis of their electromagnetic radiation.

Knowing what stars are, that those twinkling pin points of light have a structure, and that our Sun is made of the same stuff as down here on Earth had a similar intellectual impact as the change from the geocentric to the heliocentric model of the 17th century known Universe.

Some elements were first discovered out there before being found down here on Earth. For example, helium was discovered in 1895 in the spectrum of the Sun, and so was named after Greek word for the Sun (Helios).

It’s worth repeating for emphasis that our knowledge about astronomical bodies is coded in the light that they emit. All we can measure is the colour (i.e. wavelength l) of the lines in the spectra and the intensity at each wavelength.

There are three categories of spectra: continuous, band and line. Line spectra are subdivided into emission and absorption spectra.

Start with a demonstration of the sodium (Na) spectrum. View a sodium lamp using either an optical spectrometer or hand-held spectroscopes. Students should see a clear set of differently-coloured spectral lines, with (apparently) random spacing.

Now discuss: Why do we observe spectral lines? Each line is an image of the slit in the spectrometer (if you have an optical spectrometer indicate it to the students).

(To emphasise this, you could show that a circular laser beam and a grating gives a series of circular diffracted spots . A laser line parallel to the grating slits gives a series of lines. (A laser line is also the commercial name for a useful and cheap DIY item used to give a line of light for setting tiles horizontal etc.)

Remember that a class 2 laser can be used with the simple warning Do not stare down the beam. Other lasers require precautions.

Each atom has a unique line spectrum, a sort of bar code that is used to identify each atomic constituent.

For each line the spectrometer determines the wavelength λ , hence c = f ×  λ , hence the energy difference between two energy levels in the atom from Δ E = h × f. (Refer to the relevant lessons, or flag forward to that section of your specification.)

A quite common misapprehension is that the line spectrum is the energy level diagram turned on its side.

Because of the high stellar temperatures many atoms become ionized, (at the centre of a star atoms are totally ionized). It is common to see a spectrum due to partially ionized atoms rather than that of just a neutral atom. This is particularly true of sodium and calcium. Only in the coolest stars will the spectrum of only neutral atoms be present.

Demonstrate an emission spectrum using a spectrometer. Simply look at a Bunsen flame into which you sprinkle salt.

Demonstrate an absorption spectrum using a spectrometer – position a white light source so that it shines through a cloud of sodium atoms – arrange the light beam above a Bunsen flame into which you sprinkle salt.

Now show the band spectrum from the hydrogen molecules in a hydrogen discharge tube (or similar). It’s also worth looking at the historically important Balmer series from the atomic hydrogen.

Finally, look at the continuous spectrum from a white light source.

Your students may wish to see examples of spectra used to classify star types. These are available on:

NASA's Astronomy Picture of the Day

The poem by G M Minchin sums up nicely the story so far, and provides an opportunity to mention how some of the scientific assumptions have changed over the last hundred years or so.

It was written before the source of stellar energy (nuclear fusion) was known, so a star’s death was thought to be due to collision. Stars were just assumed to have planetary systems (extra-solar planets were not actually discovered until 1995), and light although known to travel at a finite speed was assumed to need an ether in which to propagate.

To finish this episode, discuss the sort of evidence that can be gleaned from spectra. It should be evident that we can deduce the chemical compositions of stars, as well as interstellar dust and gas. You can add that spectra can also tell us about the following:

This topic may be either in the first or second year of advanced physics. In some...

Colour and Temperature of Stars

Using a variable resistor and a light bulb, it is possible to demonstrate how the colour of a star is related to its...

A selection of videos to use remotely with your students.