Protons, neutrons and electrons are familiar particles of matter. However, students are likely to have heard of other particles, and this episode introduces some of these.

Brainstorm to review prior knowledge. What’s in an atom, and how do we know?

Establish with the students that the atom contains:

At this point, you may find it useful to ask how students think how a neutral particle such as a neutron may be detected. You can tell them that sub atomic particle detection in 1932 relied on ionisation (as in a GM tube, or in a photographic film), and that this only detects charged particles. They should realise that the neutron must do something to some other matter that then produces some ionising radiation. (For Chadwick, the ionising radiation consisted of protons emitted from paraffin wax when neutrons hit the nuclei of hydrogen atoms. The neutrons came from beryllium that had been bombarded with alpha particles. (J Chadwick, The Existence of a Neuron, Proceedings Royal Society of London, 1932)

Discussion: Conservation of charge and mass

Use alpha and beta decay to show conservation of charge and baryon number (see below).

Use the equations for one example of each, e.g.:

To show conservation rules in action: the fact that the bottom numbers add to give the same total each side shows conservation of charge, while the fact that the top numbers do likewise shows that the number of nucleons (neutrons and protons) is also conserved. Introduce the term baryon (heavy particle) for these two particles, so that these processes also conserve baryon number. It is worthwhile giving each student an example to do, as this is confidence building, and it is a simple skill that is often examined.

It may help your students, before embarking on a discussion of the various families of particles, if they have an idea of the different units used for mass. All those powers of 10 are very inconvenient; hence, it is easier to work in energy units, particularly the MeV (mega electron volt).

Although it is useful to have met E = m × c 2 , this is not essential. All that is needed here is that students appreciate that mass and energy can be inter-converted in nuclear reactions (such as fission and fusion, which students should be familiar with), and that the energy that would be released if the entire mass of a particle were transferred into energy is used as a measure of its mass in particle physics. Rather than define an electron-volt in terms of charge and pd, you may prefer to state that it is a convenient atomic size energy unit where 1 MeV = 1.6 × 10-13 J equivalent to 1.783 × 10-30 kg. It is useful to have a poster in your lab/ teaching room with different mass units on it. Students who have met the equation can see that there is a c 2 involved in the inter-conversion.

Hadrons is a collective term for both mesons and baryons ; mesons are less massive than baryons.

This activity is a card-sorting exercise. Helpfully, this slows down the pace compared with teacher exposition or question and answer. Introduce the activity by explaining that, following the discovery of the neutron, many other particles were discovered, including some strange ones: these seemed to be created in pairs, encouraging the physicist Murray Gell-Mann to allocate strangeness numbers to some of these particles. In these reactions, strangeness was conserved. 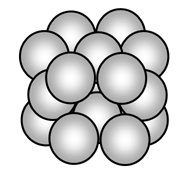 This is a kinaesthetic exercise using cards for a collection of hadrons. It is best to print up several sets of the two hadron card sheets, on card rather than paper. There is a similar sheet of lepton cards – they can be added to or simplified as you wish. It is best to use a different colour for the lepton cards. You may consider laminating them.

For the first exercise, use the first sheet of hadron cards (omitting some mesons and all anti-baryons), cut into individual cards.

Ask your students to sort particles by mass and to note the charge and baryon number. Mesons are those hadrons, mostly of lower mass, which have baryon number of 0.

Later, the cards can be used, together with genuine particle reactions, to check on conserved quantities.

Conclude this episode with some questions for students to research, leading to the next episode:

It is important to avoid turning this entire topic into ‘stamp collecting’. The...

In an electron gun, the metal plate is heated by a small filament wire connected to a low voltage. Some electrons (the...

Demonstration: the CRO (cathode ray oscilloscope) gives a visual display of the rectifying action of a diode.

In 1925, C. R. T. Wilson proposed that the electric fields in clouds might accelerate electrons to relativistic speeds causing...

Some students visualise an electron as a smeared cloud of charge