In this episode, you can look at the different features of the core of a nuclear reactor, and explain its operation using your students’ knowledge of nuclear physics. 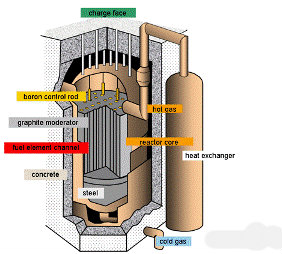 Discussion: The construction of a nuclear reactor

Look at a diagram or animation of a nuclear reactor. Check what your students already know about the reactor’s construction.

How can we make it more likely that a neutron will collide with a 23592U nucleus? There are two ways, both used in nuclear power reactors:

Slow down the fast neutrons to increase their chance of being captured by a fissile 23592U nucleus. This process is called moderation.

Concentrate the 23592U compared to the 23892U. This process is called enrichment.

The speed of the fast fission neutrons is slowed down (moderated) by allowing them to collide with a suitable moderator nucleus. Conservation of momentum tells us that the speed of a light neutron colliding with a massive nucleus will be little affected. We need a material with relatively light nuclei to absorb momentum and energy from the neutron.

Look at the periodic table for some ideas:

So there are a number of possibilities, each with a balance of advantages and disadvantages.

Bombs require 90% enrichment. Power station enrichment can be easily extended to get pure fissile 23592U. Herein lies an easy route to the proliferation of nuclear weapons by countries that have nuclear power programs.

Extend your earlier discussion of chain reactions to introduce the idea of critical mass. At least one of the fission neutrons must induce a further fission to allow for a chain reaction. Some may simply escape from the fuel assembly; others may be absorbed by the 23892U, by structural materials used in the construction, by the coolant, by the fission fragments etc. Fewer will escape if there is a smaller surface area to volume ratio.

For enriched uranium, the critical mass is roughly the size of a grapefruit. Picture bringing two half-grapefruit together to cause an explosion. Why would the critical mass be different for shapes other than a sphere? (A sphere has the lowest area to volume ratio. Other shapes with the same mass would have greater areas, so more neutrons would escape, making a chain reaction less likely.)

A coolant carries energy away from the core. What are the desirable properties of the coolant? (It must not absorb neutrons; it must have high thermal conductivity, high specific heat capacity and high boiling point.)

You can now look at the process of nuclear fusion. (This will have been touched on when considering the graph of binding energy per nucleon.) Students should be able to calculate the energy changes from values of nuclide mass. Emphasise that the energy released per nucleon in fusion is larger than for fission.

This topic does not lend itself to much practical work; there are a few analogue...

This episode discusses: mass defect and atomic mass units; and, fission and fusion linked to binding energy. And is...

There are two cataclysmic possibilities for rearrangements of nuclei that result in a movement towards a lower-energy, more...

The speedy steel plate: One of the fastest moving man-made objects ever detected was a manhole cover. As a result of the...