Having established the existence of the nucleus, you can now consider experimental evidence for its size, starting from the Rutherford experiment.

Discussion and worked example: Size of the nucleus

You can get an idea of the possible size of the nucleus by thinking about Rutherford’s experiment. Ask: What impact parameter will result in the a particle getting closest to the nucleus? (A head-on collision with p = 0.)

The principle of the conservation of energy is used to calculate the distance of closest approach as a measure for the size of a nucleus. Understanding the calculation that follows depends upon whether the students have covered electric potential and fields. Alternatively it serves as good revision.

If the α momentarily stops when at a distance d from the (centre of) the nucleus of charge Ze, the energy in the field is:

This equals the initial kinetic energy of the α particle. Rutherford used an α source given to him by Madame Curie. The α energy was ~ 7.7 MeV.

For gold, Z = 79. Solving gives d ~ 3 × 10-14 m. Compare this with the diameter of gold atoms ~ 3 × 10-10 m. So a nucleus is at least 10 000 times smaller than an atom. It is important to emphasise that this calculation gives an upper limit on the size of the gold nucleus; we cannot say that the alpha particle touches the nucleus; a more energetic α might get closer still.

An atom is mostly empty (which is why most as went straight through – any electrons would hardly impede the relatively massive high speed α).

Ask your students to suggest a scale model of the nuclear atom. For example: if a nucleus was 1 mm diameter, an atom would be 10 000 times larger or 10 m in diameter. Choose a suitable position for a 1 mm nucleus (a small ball bearing or ball of Blu-tac). Pace out 5 m (five large steps) to the edge of the atom where the electrons are. NB: textbook diagrams of an atom with a nucleus are not drawn to scale. 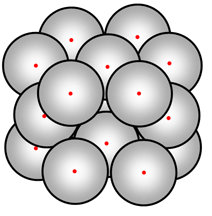 Reinforce an accurate picture by getting a student to stand up as a nucleus, estimate their girth (40 cm?) and ask where another student would have stand to be at the edge of the atom. 104  ×  40 cm = 4000 m}, so the radius of this atom is 2 km! Check with a local map to find a named location that students will recognize that is 2 km away.

Further reinforcement: in a solid where atoms are close packed, the distance between adjacent nuclei ~ the size of an atom, i.e. equivalent to two students standing 4 km apart!

So it’s quite amazing that any hit a nucleus at all. Both are a similar size. Cross sectional area presented by a nucleus ~radius2, so ~1 × 10-28 m2}.

Ask: How would you expect the number of reflected as to depend upon the thickness of the metal foil containing the target nuclei? (Imagine the gold atoms in layers, chance of a deflection increases with thickness, but absorption on the way in or back out of the increasingly thick foil will eventually prevent any further increase in the number reflected and detected.

It is of great help if your students can recall the following orders of magnitude:

Discussion: Atomic number and the charge on a nucleus

So the electric charge on a nucleus is given by the atomic number  ×  e, i.e. Z e. With one exception (hydrogen, H-1), Z is always less than the atomic mass number. So what accounts for the difference? The atom must be electrically neutral. Rutherford proposed the neutron.

Recall that Rutherford’s analysis gives an upper limit on the size on the nucleus (d ~ 1 α particle energy ). The size you measure depends upon the energy of the α particle you use. So we need another approach to find the size of a gold nucleus. Can you think of a better particle to probe the size of a nucleus? (The neutron – being uncharged it will get closer.)

Another technique is the deep inelastic scattering of electrons. Refer back if you have already covered the wave nature of particles (de Broglie waves λ  = hp), or this topic can be inserted here if desired. The electron diffraction apparatus has a basic similarity with a particle scattering. The electrons are fired at a thin film – in this case of graphite.

Rutherford was fortunate that the de Broglie wavelength of the α particles (unknown to him) was quite small, and the coulomb repulsion stops as getting too close – otherwise diffraction effects would have confused the data! (Try the calculation if you have already covered λ  = hp.)

Discussion: A puzzle for a future lesson

There is a fundamental problem with Rutherford’s model. Ask your class: How can an atom with a central nucleus can be stable – why doesn’t it collapse? According to classical electrodynamics, the electrons should emit radiation as they orbit, and spiral inwards.

(It’s good to leave a class with a puzzle for a future lesson.)

Episode 522 - The size of the nucleus.doc

Students will be familiar with the nuclear model of the atom, in which the atom is...

Magnetic Resonance Imaging (MRI) uses a magnet, strong enough to pick up a car, to produce detailed images of your internal...