This episode introduces the ubiquitous nature of radioactivity, and considers its detection. It draws on students’ previous knowledge, and emphasizes the importance of technical terminology.

Use a Geiger counter to reveal the background radiation in the laboratory. What is the signal like? (It is discrete, erratic / random.) Does it vary from place to place in the room? (No; it may appear to; this is an opportunity to discuss the need to make multiple or longer-term measurements.) Does it vary from time to time? (No, it’s roughly constant.)

Count for 30 s to get a total count N ; repeat several times to show random variation. Calculate the average value of N.

(Note: a good rule of thumb is that the standard deviation is

Which is better: 10 counts of 30 s, averaged to get the activity, or one count of 300 s? (They amount to the same thing. The statistics of this is probably beyond most post-16 level students.)

Calculate the background count rate from the data (typical value is 0.5 counts per second or 30 counts per minute, but this varies a lot geographically.) 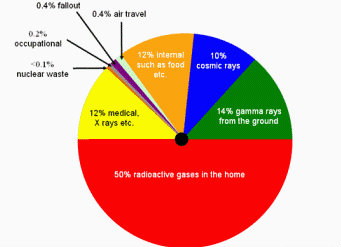 Look at charts showing sources of background radiation. Consider how these might vary geographically, with time, occupation etc.

Note that pie charts in text books etc showing relative contributions are often calibrated in units of equivalent dose of radiation called sieverts (symbol Sv); sievert is a unit which takes account of the effects of different types of radiation on the human body.

Airborne radioactive substances are attracted to traditional computer and TV screens that use a high voltage. Similarly a charged balloon will also accumulate radioactive dust and have an activity larger than the average background. The fresh dust in vacuum cleaner bags has a noticeably higher activity too.

Set up a Geiger counter to measure the activity of vacuum cleaner dust; don’t forget to measure background rate also.

Discussion and survey: Sources of radiation – should we worry?

Introduce activity of a sample as a quantity, measured in becquerels (Bq). Mass of a typical student is 70 kg, so

The Radiation Protection Division of the Health Protection Agency (formerly the National Radiological Protection Board, NRPB) defines a radioactive substance as having specific activity 400 Bq kg-1.

Should we worry about this? Ask students to complete this survey, and then re-visit at the end of the topic. For each statement, indicate whether they think it is true or false, or they don’t know.

S1: Radioactive substances make everything near to them radioactive.

S2: Once something has become radioactive, there is nothing you can do about it.

S3: Some radioactive substances are more dangerous than others.

S5: Saying that a radioactive substance has a half life of three days means any produced now will all be gone in six days.

Discussion and demonstrations: Am-241 source, plus use of correct vocabulary

Place an Am-241 source close to the GM tube and measure the count rate, which will be impressive, compared to background. (Some end window GM tubes will not detect alpha emission from AM-241 but only weak gamma).

From here on, start to use appropriate technical vocabulary, drawing on students’ earlier experience. For example: Substances are radioactive, they emit radiation when they decay. Why are some substances radioactive? (They contain unstable nuclei inside their respective atoms.) The unstable nucleus is called the mother and when it (she?) decays a daughter nucleus is produced (it’s not quite like human procreation!).

Eventually the activity of a radioactive substance must cease. However, point out that the decay of the americium doesn’t seem to be getting any less. There are a very large number of nuclei in there!

What particular property does nuclear radiation have – what does it do to the matter through which it passes? (It is ionizing radiation. It creates ions when it interacts with atoms.) What is an ion? (A neutral atom which has lost or gained (at least one) electron.)

Simplified diagram of a smoke alarm

To knock an electron from an atom, the ionizing radiation transfers energy to the atom – this is how nuclear radiation is detected. It is not difficult to detect the presence of a single ion – electron pair, so it’s easy to detect the decay of single radioactive nucleus. Chemists can detect microgrammes or nanogrammes of chemical substances, physicists can detect individual atomic events.

Show a spark detector responding to the proximity of an alpha source. (NB At first, do not refer to the source as an alpha source.) Move the source away a few centimetres; you do not need much distance in air to absorb this radiation. Ask students to recall which type of radiation is easily absorbed by air. (Alpha.) 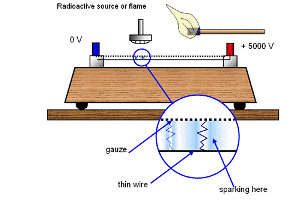 Comment that a GM tube is not dissimilar to a spark counter, but rolled up to have cylindrical symmetry. At this point, you could discuss the sophisticated design of a GM tube and associated counter. The end window is usually made of mica and has a plastic cover, with holes, to protect the mica.

This can be a fascinating area for students. Over the age of 16, they can work with...

Demonstration: this demonstration focuses on the properties of gamma radiation. You can show that it is much more penetrating...

Demonstration: this demonstration focuses on the properties of beta particles. It follows closely from identifying the three...

Episode 508: Preparation for the radioactivity t...

Over the age of 16, students can work with certain radioactive sources, provided they are carefully supervised. One of your...