This episode considers uses of lasers, and the underlying theory of how they work.

A laser beam can be made visible by blowing smoke or making dust in its path. Its path through a tank of water can be shown by adding a little milk.

Show laser light passing through a smoke filled box or across the lab and compare this with a projector beam or a focussed beam of light from a tungsten filament light bulb.

Show the principle of optical fibre communication by directing a laser beam down a flexible plastic tube containing water to which a little milk has been added.

Show a comparison between the interference pattern produced by a tungsten filament lamp (with a monochromatic filter) and that produced by a laser.

Talk about where lasers are used – ask for suggestions from the class. As far as possible this should be an illustrated discussion with a CD player, a laser pointer, a set of bar codes, a bar code reader and the school’s laser with a hologram available for demonstration.

Show the list of uses. Invite students to consider the uses shown in the list. Can they say why lasers are good for these? The reasons might be:

Lasers must be used with care. Use the text as the basis of a discussion of the precautions which must be taken.

If students are familiar with energy level diagrams for atoms, and of the mechanisms of absorption and emission of photons, you can present the science behind laser action. Point out the difference between:

(c) stimulated emission – the electron is stimulated to fall back to a lower energy level by the interaction of a photon of the same energy. 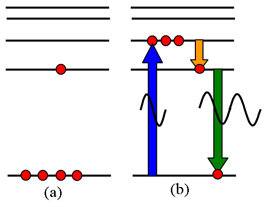 Define population inversion: Usually the lower energy levels contain more electrons than the higher ones (a).

In order for lasing action to take place there must be a population inversion. This means that more electrons exist in higher energy levels than is normal (b).

For the lasing action to work the electrons must stay in the excited (metastable) state for a reasonable length of time. If they fell to lower levels too soon there would not be time for the stimulating photon to cause stimulated emission to take place.

Laser stands for Light Amplification by Stimulated Emission of Radiation. The diagrams in

The laser beam also shows very little divergence and so the power density (power per unit area) diminishes only slowly with distance. It can be very high.

For example consider a light bulb capable of emitting a 100 W of actual luminous radiation.

At a distance of 2 m the power density is

The beam from a helium-neon gas laser diverges very little. The beam is about 2 mm in diameter close to the laser spreading out to a diameter of about 1.6 km when shone from the Earth onto the Moon!

This is why you must never look directly at a laser beam or its specular reflection.

Ask the class to calculate the power densities for a 100 W lamp and a 1 mW laser at the Moon.

It is likely that all pupils will have experienced laser technology in their homes...

Using lasers in the classroom (16-19 physics)

A collection of practicals and classroom activities for the use of a lasers in the...

As regards post-16 examinations, the formal requirements laid down are modest, or non-existent, so that the level of treatment...

Now let's work out how the trip times and frequencies combine to predict the different fixed patterns of displacements. These...