Introduce the topic by demonstrating the electroscope and zinc plate experiment. 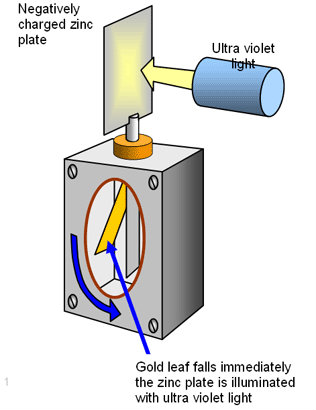 Point out to the students that the photoelectric effect is apparently instantaneous. However, the light must be energetic enough, which for zinc is in the ultraviolet region of the spectrum. If light were waves, we would expect the free electrons to steadily absorb energy from the waves until they escape from the surface. This would be the case in the classical theory, in which light is considered as waves. However, we could wait all day and still the red light would not liberate electrons from the zinc plate.So what is going on? We picture the light as quanta of radiation (photons). A single electron captures a single photon. The emission of an electron is instantaneous as long as the energy of each incoming quantum is big enough. If an individual photon has insufficient energy, the electron will not be able to escape from the metal.

Summarise the important points about the photoelectric effect.

Try this analogy, which involves ping-pong balls, a bullet and a coconut shy. A small boy tries to dislodge a coconut by throwing a ping-pong ball at it – no luck, the ping-pong ball has too little energy! He then tries a whole bowl of ping-pong balls but the coconut still stays put! Along comes a physicist with a pistol (and an understanding of the photoelectric effect), who fires one bullet at the coconut – it is instantaneously knocked off its support.

Ask how this is an analogy for the zinc plate experiment. (The analogy simulates the effect of infrared and ultra violet radiation on a metal surface. The ping-pong balls represent low energy infrared, while the bullet takes the place of high-energy ultra violet.)

Now you can define the work function. Use the potential well model to show an electron at the bottom of the well. It has to absorb the sufficient energy in one go to escape from the well and be liberated from the surface of the material.

The electronvolt is introduced because it is a convenient small unit. You might need to point out that it can be used for any (small) amount of energy, and is not confined to situations involving electrically accelerated electrons.

It is useful to compare the electron with a person in the bottom of a well with totally smooth sides. The person can only get out of the well by one jump, they can't jump half way up and then jump again. In the same way an electron at the bottom of a potential well must be given enough energy to escape in one jump. It is this energy that is the work function for the material.

Now you can present the equation for photoelectric emission:

Picture a photon transferring energy to one of the electrons which is least tightly bound in the metal. The energy of the photon does two things.

Some of it is needed to overcome the work function Φ.

The difference is the kinetic energy of the electron when it leaves the metal.

A voltage can be applied to bind the electrons more tightly to the metal. The stopping potential Vs is just enough to prevent any from escaping:

Set the students some problems using these equations.

The Millikan experiment question may best come after

(Some useful clipart is given here below).

It is most likely that this will be a topic that is completely unfamiliar to all...

Photoelectric fountains of the Moon

In 1972, Apollo 17 astronauts in orbit around the Moon observed an unexpected phenomenon — what they described as bands...

•In his 1905 photoelectric paper, Einstein did not use the term photon, but referred to a ‘light quantum’. The word photon was...

No sooner do students see that light has a wave property (and have measured its wavelength) then this story is upset with...