Students will already have ideas about electromagnetic induction. In this episode, your task is to develop a picture of induction in which it is the cutting of lines of flux by a conductor that leads to an induced EMF or current.

Start with a simple experiment involving a coil of wire and a voltmeter. This will give you a chance to assess the knowledge that students bring to this section. 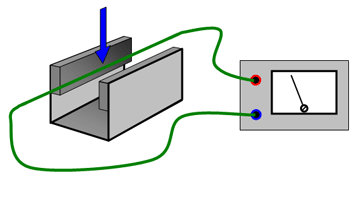 A good starting point is to revise the pre-16 level ideas that your students should have about electromagnetic induction.

The first two demonstrations involve moving a wire in a magnetic field and then a permanent magnet into and out of a small coil. In both it is important to emphasise that:

The third demonstration shows that movement is not essential and that changing the field near a coil has similar effects to a moving magnet.

(The demonstration with a dynamo adds little at this stage and could be delayed until generators are discussed further.)

Discussion: How is the electricity made?

Consider a conducting rod PQ moving at a steady speed v perpendicular to a field with a flux density B. An electron (negative chargee) in the rod will experience a force (Bev) (Fleming's left hand rule) that will push it towards the end Q. The same is true for other electrons in the rod, so the end Q will become negatively charged, leaving P with a positive charge. As a result, an electric field E builds up until the force on electrons in the rod due to this electric field (Ee) balances the force due to the magnetic field.

For a rod of length L

Clearly what we have here is an induced EMF (no complete circuit so no current flows) and already we can see that more rapid movement gives a greater induced EMF.

The EMF will now cause a current to flow in the external resistor R. This means that a similar current flows through the rod itself giving a magnetic force, BIL to the left.

(L is now the separation of the two conductors along which the rod PQ moves.) An equal and opposite force (to the right) is needed to keep PQ moving at a steady speed.

The work done in moving the rod will equal the energy dissipated in the resistor.

Work done on the rod = BILvt

But in this case it can be seen that the electrical circuit encloses more magnetic field as the rod is moved along and that in one second, the extra area enclosed will be

We have already called B the flux density, so it is perhaps not surprising that the quantity B  ×  A can be called the magnetic flux, F.

How can the induced EMF be increased? Discussion should lead to:

But there is a further possibility and this is to increase the number of turns of wire N in our circuit. By doing this, the flux has not been altered but the flux linkage (N  ×  F) will have increased. Hence it is more correct to say that

This relationship is known as Faraday's law: – when the flux linked with a circuit changes, the induced EMF is proportional to the rate of change of flux linkage.

Finally, remind your students that the magnetic force on our simple generator (a) (b) was in a direction which would make the bar slow down unless an external force acted. This is an example of Lenz's law: – the direction of the induced EMF is such that it tends to oppose the motion or change causing it.

To include this idea in our formula, a minus sign has to be introduced, giving;

We have two formulae:

When using these formulae, it is important to realize that B should be at right angles to the area A. If this is not the case, then it is the component of the field perpendicular to A that should be used.

The units for flux are thus N A-1 m. This unit is known as the Weber (Wb).

Although it is better to delay questions about Faraday's law until after more experimental work has been done, the relationship between flux, flux density and flux linkage should be reinforced with a question or two.

To support the theory, it is important that students look at electromagnetic induction experimentally in more detail than was met in the initial demonstration. What you choose to do will depend on what apparatus is available.

The experiment suggested here is based on coils (120/240 turns) linked by iron cores. Again the basics of Faraday's law are shown and there is a very strong lead into transformers.

A simple experiment (or demonstration) can be done by passing a permanent magnet through a coil of wire that is connected to a data logger.

This shows clearly that as the magnet moves into the coil an EMF is generated for a short time.

Some ideas for quick demonstrations of effects related to electromagnetic induction.

Several demonstrations show the effect. From these experiments it should become clear that Lenz's law applies, i.e. the induced effects oppose the motion that is producing them. One of the main uses for eddy currents is in electromagnetic braking.

When eddy currents flow in a resistive metal, eddy current heating results. It is put to good practical use, e.g. in the production of pure alloys where eddy current heating of a metal crucible replaces a dirty furnace. More frequently the heating is a nuisance as it wastes energy in electromagnetic machines.

Some descriptive work can reinforce these ideas.

This topic develops a formal description of magnetic fields and moves on to...

Moving a wire through a magnetic field: lighting...

This is an interactive teacher demonstration that can be used to introduce students to the idea of inducing an electrical...

In a generator, motion of a conductor in a magnetic field induces an EMF. In a transformer, it is the changing field that...

Demonstration: Faraday's law of electromagnetic induction is a very important principle. Most of the electrical power in the...