Episode 413: The force on a moving charge

Here you can extend the idea of a magnetic force on a current to consider moving charges.

If a fine beam electron tube is available, the sight of the paths left by electrons travelling in a circular path when a magnetic field is applied makes a good introduction to this episode. If the apparatus is not available, then using a magnet to distort a black and white TV picture offers an alternative but avoid a colour TV where lasting damage can occur.

Episode 412 talked about the force on a conductor carrying a current in a magnetic field. Any moving charge is an electric current, whether or not the charge is flowing through a material or not. Therefore, it is not unreasonable to expect to find a force on a charged particle moving through space.

Suppose we have such a particle with a charge q, moving at a speed v, at right angles to a magnetic field of flux density B . In a time t , the charge will move a distance L = v  ×  t and is equivalent to a current I = Qt.

force on the current = BIL

And simplify to get:

If the field and current are at an angle θ , then the formula will be modified to Fmagnetic = Bqvsin( θ )

You can rearrange this to get an expression for the momentum:p

If we write e for the electronic charge, the equation becomes F = Bev , and you might refer to this as the Bev force.

There are many applications of this force, several of which can provide interesting experiments or demonstrations. You will need to select those that match the requirements of your specification

Demonstration: Measurement of e/m for electrons

Historically this experiment, performed by J J Thomson in 1897,is of great significance. It may be possible for you to repeat his experiment using electric and magnetic field to deflect the electron.

Linear accelerators make use of an electric field to accelerate particles but other accelerators from the early cyclotron to the modern facilities such as at CERN are circular and make use of magnetic fields. If your specification requires then the operation of the cyclotron will have to be covered.

There is a wide range of these both of historical and modern interest. Again there is a chance to compare the effects of electric and magnetic fields. If students are studying chemistry, you can draw on their knowledge of mass spectrometers to emphasise the value of these techniques. 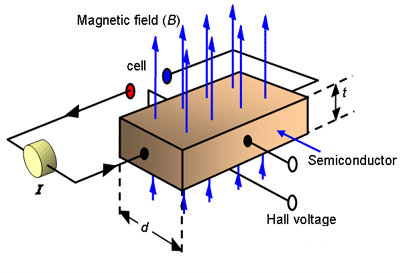 As electrons move through a piece of n-type semiconductor through which a magnetic field passes, then the electrons experience a force (Fleming's left hand rule) which moves them to one side of the semiconductor slab. An electric field builds up giving a force in the opposite direction. Eventually, the two forces balance such that;

So the Hall voltage, VHall = Bvd , gives a way of measuring the B-field.

There is a wide range of interesting possibilities here.

Close to home, the motion of electrons in the ionosphere allows radio communication over large distances and leads to the aurora borealis at times of great solar activity.

This solar activity itself is the result of the interaction of charged particles in the Sun with the magnetic fields on and above the Sun's surface.

At greater distances, the acceleration of electrons in the intense magnetic fields of active galaxies and neutron stars is a source of radio and X-ray emissions (amongst others).

Many of these applications can be studied further with the questions that follow.

Episode 413 - The force on a moving charge.doc

This topic develops a formal description of magnetic fields and moves on to...