This episode introduces the above three quantities for the electric field. The students’ familiarity with the equivalent concepts in the gravitational field should help here. The major difference is that because of repulsion, by defining the zero of potential to be at infinity, we can have positive potentials and positive energies in the electric field, whereas they are always negative in the (solely attractive) gravitational field.

Recall: how is field strength defined at a point in the gravitational field? (As the force per unit mass placed at that point in the field – with units therefore of N kg-1 .)

What would therefore be the natural way to extend this definition to the electric field? (As the force per unit charge. Thus it would have units of N C-1.)

We thus define the electric field strength at a point in a field as:

where E is the electric field strength (N C-1)

As will be explained in the next episode, the unit for electric field strength can also be expressed as volts per metre, V m-1.

Now, for the non-uniform field due to a point (or spherical) charge, we can use Coulomb’s law to find an expression for the field strength. Consider the force felt by a charge q in the field of another charge Q, where the charges are separated by a distance r:

This is our result for the field strength at a distance r from a (point or spherical) charge Q .

We now turn to considerations of energy. Again, just as in the gravitational case, we choose to define the zero of energy at infinity. However, because of the existence of repulsion, we have the possibility of positive energy values as well as negative ones.

Consider bringing a positive charge q from infinity towards a fixed, positive charge Q . Because of the repulsion between the charges, we must do work on q to bring it closer to Q . This work is stored in the electric field around the charge q . The same would apply if both charges were negative, due to their mutual repulsion. In both cases therefore, the energy of q increases (from zero) as it approaches Q ; i.e. energy of charge q is positive.

If Q and q are of opposite signs, however, they attract each other, and now it would take work to separate them. This work is stored in the electric field around the charge q, and so q's energy increases (toward zero) as their separation increases; i.e. q's energy is negative.

With the aid of integration, we can use Coulomb’s law to find the energy of q in the field of Q . The final expression turns out as:

where r is the separation of the charges. EE is measured in joules, J.

Notes on this expression:

By considering the work done if q were fixed and Q were brought up from infinity, it should be clear that this expression is the energy of either charge in the other’s field.

This expression is valid for the non-uniform field around point or spherical charges.

By defining energy to be zero at infinity, this expression gives us absolute values of energies. Differences can we worked out as change in:

V is therefore measured in joules per coulomb, J C-1, which has the alternative, and more familiar name of volts, V. (Students sometimes worry about the fact the potential has the symbol V and its unit is also V for volts – the context makes it clear which V is being used, but be aware of this possibility for confusion).

For the non-uniform field around a point charge, the above expression for EE gives us a simple expression for potential. The potential at a distance r from a point or spherical charge Q is given by:

For the non-uniform field around a point charge, the above expression for EE gives us a simple expression for potential. The potential at a distance r from a point or spherical charge Q is given by:

Demonstration: Potential around a charged sphere

Exploring the electrical potential near a charged sphere. This makes use of a flame probe; it is essential to practise the use of this before demonstrating in front of a class.

The minus sign is again a relic of the more precise vector equation – it is there to give the direction of the field strength. The diagram below shows a plot of potential around a positive charge, and the two gradients drawn show where the field is high and where it is low. (Note that both of these gradients are negative. This would give a positive field strength by

E = −  Δ V Δ r , indicating that the field acts in the positive x-direction, as indeed it does. This is what was meant by the minus sign being a relic of the more precise vector equation). 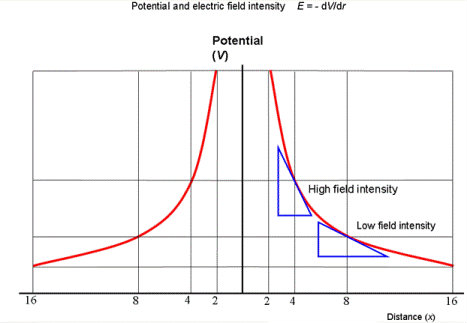 We can now also understand why it is that a conductor is an equipotential surface. Inside a conductor, no electric field can exist – if it did, the charges would feel a force and move around in such a way as to reduce the field. At some point equilibrium is reached and the field is zero. If the field is zero, then the potential gradient must be zero – i.e. the conductor is an equipotential surface.

It should now also be clear why equipotential surfaces get further apart as the field decreases in strength as was seen in the diagrams in episode 1, and why field strength can be quoted in units of V m-1.

Students will have first come into everyday contact with electric field phenomena...

An electric field exists in any region where a charged particle is subject to a force that depends only on the particle’s...

Many younger students think that magnets stick to certain objects, rather than recognising an attractive force that acts at a distance (without contact), or through intervening materials.