In this episode, students will learn how to combine concepts learned in the study of circular motion with Newton’s Law of Universal Gravitation to understand the (circular) motion of satellites. While real orbits are very rarely circular, they should still find it satisfying to see the relative simplicity with which the laws they have learned lead to an explanation of Kepler’s 3rd law, which had previously been only an empirical law.

We will start with a thought-experiment, often attributed to Newton, in which students will learn that astronauts orbiting the Earth are not actually weightless, but feel as though they are because they are in constant free-fall.

There are some applets available to aid discussion in this episode. If it is at all possible, students should try to play around with these applets themselves too.

(Newton asked what would happen if you fired faster again. He reasoned that the cannonball would maintain a constant height from the surface of the Earth – in other words, it would move in a circular orbit.) 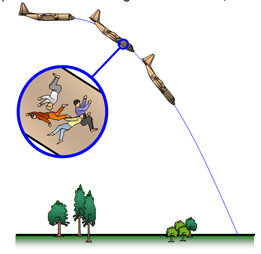 How would you feel if you were orbiting like the cannonball? (Well, you would be falling the whole time, whilst moving horizontally at the same time. Imagine falling in a lift with the cable cut. You’d have butterflies in your stomach and if you held a ball out in front of you and let go it wouldn’t move relative to you. This is exactly what would happen if there were no gravitational field, and it is in this sense that you would feel weightless. When astronauts in an orbiting spacecraft are said to be weightless, it is not actually true – they are still in (a relatively strong part of) the Earth’s gravitational field, and so they have a weight, but they just don’t feel it because both they and the spacecraft surrounding them are constantly falling towards the centre of the Earth (whilst also moving tangentially around the orbit).)

So, launching a satellite into a circular orbit requires it being set off with the right tangential speed for the height at which you want it. The following applet allows you to play around with initial speeds/directions to see what would happen. It’s quite surprising to some students to realise that at a particular height, there is a range of speeds and directions that you can start the satellite at, for which it will be trapped in orbit (although elliptical, not circular).

Kepler discovered three laws of planetary motion based on the painstakingly recorded observations of Brahe in the early 17th century. These laws were however empirical – that is they fitted the patterns observed but had no physical explanation. Newton later managed to explain the laws with his laws of motion and Law of Universal Gravitation. Kepler’s three laws were:

All of the planets move in elliptical orbits with the Sun at one focus.

The radius vector (imaginary line between the Sun and the planet) sweeps out equal areas in equal times.

The square of the period of a planet’s orbit is directly proportional to the cube of its mean distance from the Sun.

These laws apply for all satellite motions (not just for the planets around the Sun). Remember that circular orbits are just a special case of elliptical orbits.

We shall concentrate on circular orbits at constant speed only (elliptical orbits are well beyond the scope of A-level courses). The first two of Kepler’s laws are trivial for circular orbits. An ellipse has two foci normally but in the case of a circle they are coincident and at the centre of the circle. Also if the planet moves at constant speed in a circle then the radius vector has to sweep out equal areas in equal times. So we shall concentrate on deriving the third law for circular orbits.

What is the only force acting on a planet orbiting the Sun? (The gravitational pull from the Sun, neglecting the negligible pulls from other objects in the solar system and beyond.)

And if the planet is moving at constant speed in a circle it must have centripetal force acting on it.

What is the expression for centripetal force? mv 2r

For the gravitational force ? GMmr 2

But the speed v can be calculated as distance travelled in one orbit (2 π r ) divided by the time taken, T :

Plugging this into the previous equation, and cancelling the m terms on both sides gives us:

Or in other words, since 4 π 2GM is constant, the square of the period of orbit is proportional to the cube of the radius of the orbit – Kepler’s third law. A powerful result proved simply by the laws of motion and gravitation. This law shows that the further away a planet is, the longer its period of orbit (but in a non-linear way).

Although this law (as are all of Kepler’s laws) was originally discovered for the motion of the planets, it works equally well for all satellite motion – for example the motion of the Moon and artificial satellites around the Earth. We just need to realise that the actual M in the constant (4 π  2GM) is the mass of the Earth in that case (or the mass of whichever body is being orbited).

We can apply this idea to geostationary orbits. We know from Kepler’s third law that the further away a satellite is from the body it is orbiting, the longer its orbital period.

If an orbiting satellite had a period of 24 hours, and you saw it overhead at, say 10.00 am, when would you next see it overhead? (Because both the Earth would have completed one rotation in the same time it took the satellite to complete one orbit, it would next be overhead at 10.00 am the next day. Such a satellite is said to be geosynchronous.)

The orbit labelled GEO above is geosynchronous, but not geostationary, because the satellite would appear from the equator to wander first north, and then south and then back again over a 24 hour period.

The orbit labelled GSO is geostationary.

These examples look at orbital motion under gravity. They can be tackled independently by most students, but solutions are provided if you wish to use them as worked examples.

Students will have been aware of the effects of gravity since they first fell down...

How do satellites stay in orbit?

Perhaps the first question to think about is how they get into orbit in the first place. Let's try a thought experiment that...

Demonstration: the apparent motion of the Sun and planets around the Earth, including epicyclic motion.

Here you look at the performance of a satellite camera.