When two or more waves meet, we may observe interference effects. It is likely that your students will have already met the basic ideas of constructive and destructive interference.

The following simple demonstrations could be used to introduce this section; don’t feel that you have to give detailed explanations at this stage.

Emphasise that, in each case, there are two or more sources of light or sound reaching the eye or ear. You are going to look at an experiment designed to have two sets of light waves meeting in a very controlled way, i.e. Young’s two-slit experiment.

In any work with lasers, it is worth pointing out to the class the label in the laser. It should say Class 2: do not stare down the beam. With such a laser, a momentary reflection of the beam into someone’s eye will not cause an injury.

Because the wavelength of light is very small, it is worth setting up an equivalent experiment with sound waves. Use two loudspeakers connected to a single signal generator. At this stage, it is not necessary to make detailed measurements. 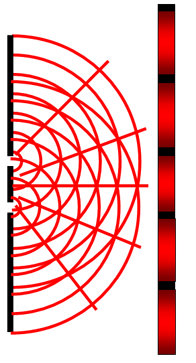 Young’s two-slit experiment is perhaps one of the most famous experimental arrangements in physics. It was inspired by Young’s discovery of interference that he related in May 1801: Given a pond with a canal connected to it. At two places in the pond waves are excited. In the canal two waves superpose forming a resultant wave. The amplitude of the resultant wave is determined by the phase difference with which the two waves arrive at the canal.

Shine laser light through a double slit on to a screen. You should see a series of evenly-spaced bright spots (fringes or maxima). Ask students to relate this to the sound experiment. (The bright fringes are the equivalent of the loud points in the sound field.)

Point to the central bright fringe. Emphasise that two light rays reach this point, one from each slit. They have travelled the same distance, so there is no path difference between them. They started off in step (in phase) with each other, and now they arrive at the screen in phase with each other. Hence their displacements add up to give a brighter ray.

If we could measure these distances approximately, we could determine λ .

Show the effects of:

It is clear that we might use this experiment to determine the wavelength of light, but how?

A modern version of the Young’s Two Slit experiment was voted the most beautiful experiment in physics in a Physics World readers’ poll in 2002. It still forms the basis of ongoing research into the fundamental quantum nature of matter.

If you have already covered the photon model for light, you may want to refer back to this. As early as 1909, it was established that fringes were found even if the source was so faint that only one photon at a time was in the apparatus. Fringes can also be seen using de Broglie (or matter) waves. The most massive particles used to generate fringes to date (March 2005) are fluorinated buckyballs C60F48 (i.e. 1632 mass units).

Discussion: Deriving and using the formula

Now derive or quote the formula (depending upon your specification). A good way to start is to ask your students to identify the important variables (they are all lengths), and to give their approximate sizes:

s, separation of the fringes (bright to bright or dark to dark) (~1 mm)

Set up a circus of Young’s two-slit arrangements (depending upon the available equipment to hand) using light, microwaves, 3GHz radio waves, ultra-sound (less noisy than audible sound!) and a ripple tank, and get students to determine the wavelength of the waves being used in each case.

You may prefer to set some up as demonstrations.

The first set of questions covers the principles of Young’s experiment.

The second set is questions for practice in using the equation.

Demonstration: For students to explain

Here are two fun demonstrations to round off this episode. Demonstrate them, and ask your students to provide explanations.

The loudness of the sound depends upon the position of the trombone slider. It is obvious that there are two paths by which the sounds reach the ear. There may be a path difference between them. If the path lengths differ by an exact number of wavelengths, constructive interference increases the volume; integral half wavelength path differences mute the sound due to destructive interference. Do not confuse this with beats; here, only one frequency is involved, whereas beating is an effect due to two close frequencies (see below).

Waves add together by superposition; that is, when two or more waves meet, the...

This episode starts by thinking about what happens when two trains of waves meet one another.

The explanation for diffraction already presented might seem a little vague: we suggested that passing through a slit allows...