This episode introduces the basic idea of superposition of waves, explaining what happens when two or more waves meet.

Show a representation of a wave and rehearse basic knowledge about waves:

Wave speed c is determined by the medium in or on which the wave propagates.

At boundaries (reflection, refraction etc), f must stay the same.

Demonstration: Waves on a rope etc

This is a useful attention grabber. Pass pulses through each other on a stretched rope, rubber tube or stick wave machine.

Set off a large amplitude pulse; just before the first pulse is reflected, chase it with a smaller amplitude pulse – observe that the pulses briefly combine then pass through each other, and carry on as before.

(For later comment, observe and note the phase change on reflection; that is, the pulse turns upside down when it reflects.)

Draw attention to this damage-less collision of waves passing through each other that is a hallmark of all wave behaviour. Colliding particles rebound and may suffer damage. (The other hallmark of wave motion is that the speed of a wave is constant and determined by the medium supporting the wave motion. Unlike particles, friction doesn’t reduce the speed; it reduces the energy (i.e. the amplitude) of the wave.) 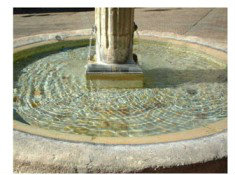 Discussion: Ripples on a pool

Superposition is an everyday phenomenon. Show some images of ripples on a pool of water as they pass through each other.

Drawing exercises reinforce the idea that, to find the displacement when two waves meet, you simply calculate the algebraic sum of the two individual displacements.

Waves add together by superposition; that is, when two or more waves meet, the...

From a teaching and learning point of view it is well worth the time and effort to introduce new terms carefully.

This is set up as a bench top experiment, but really it's a piece of practical mathematics. If run well, it can drive home the...

In these first three episodes of this topic, the idea of waves as an explanation for some phenomena has been taken apart and...