Simple harmonic oscillators show resonance if they are forced to vibrate at their natural frequency. This is a phenomenon of great importance in many aspects of science. 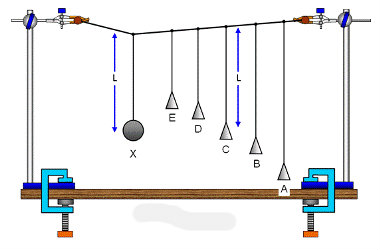 Discussion: Resonance as a phenomenon

An oscillator can be forced to vibrate with increasing amplitude; to do this; energy must be shifted in the right way.

A child on a park swing is the classic example that all can visualise. The push must come at the same natural frequency as the oscillating pendulum-like swing and at the right point in the swing’s cycle.

Resonance can lead to very large oscillation amplitudes that can result in damage. E.g. buildings etc need to have their natural frequency very different from the likely vibration frequencies due to earthquakes.

Barton’s pendulums are a famous demonstration of a resonance effect.

Student activity: An applet of a forced pendulum

Investigate a virtual pendulum which can be forced.

Students can be allocated to one of the following experiments (duplication is easy), followed by a brief plenary session where each system is demonstrated to the whole class.

Discussion: The effect of damping on resonance

If a resonant system is forced at frequencies above or below the resonant (natural) frequency f0 , the amplitude of oscillation will be reduced. The resonance curve peaks at f0 . You may need to discuss how the shape of the curve depends on the degree of damping.

The Tacoma Narrows bridge disaster is generally described as a consequence of resonance. However, the full details of the mechanism are still debated. If possible show a video of the bridge as it collapsed in high winds on 7 November 1940. However, it seems more than likely that it is an example of positive feedback, a sort of inverse damping which created this effect.

Tesla’s earth-shaking brush with the law

Whilst testing an electromechanical oscillator, Tesla attached the device to a metal pillar in his building.

Class experiment: In this experiment the amplitude of forced vibrations is measured as the driving frequency varies. It could...

Resonance has wide ranging practical applications. Any machine or structure is likely to be subjected to periodic forces...