This episode allows you to familiarise your students with the main features of simple harmonic motion (SHM), before going on to a more mathematical description.

Demonstration: Observing SHM in the lab

Start by talking about oscillations. Oscillatory motion is a type of motion that repeats itself in a cyclic fashion.

Set up some visual aids: a pendulum and a mass on a spring. Set them oscillating. 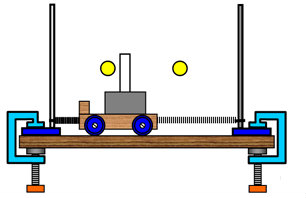 It is easier to see what is going on with a slower oscillation. Tether a dynamics trolley by springs between two retort stands. Add weights to the trolley, so that its period of oscillation is a couple of seconds. Set it oscillating; you will be able to hear the trolley as it speeds up and slows down. If you use a motion sensor connected to a computer it is easy to see the displacement time graph and velocity time graph. You could do the same for a long pendulum.

Set up an oscilloscope with its timebase switched off, so that the spot is central on the screen. Connect to a very slow signal generator, set at a frequency of less than 1 Hz. Watch the up-and-down motion of the spot on the screen. Ask about the shared characteristics of these different oscillations. Points to bring out:

The oscillatory motion repeats itself and thus has similarities with circular motion which also repeatedly returns to its starting point. (This fact will be fruitfully exploited later.)

So we have the following pattern of motion:

Of course, not all oscillations are as simple as this, but this is a particularly simple kind, known as simple harmonic motion (SHM). It is relatively easy to analyze mathematically, and many other types of oscillatory motion can be broken down into a combination of SHMs.

Discussion: the importance of SHM

At this point, it is worth saying a few words about the importance of SHM.

All clocks (starting with the pendulum in a grandfather clock) are essentially simple harmonic oscillators; all transmitters and receivers of waves are essentially simple harmonic oscillators; many aspects of engineering design from the massive to the microscopic require a detailed knowledge of SHM (e.g. bridges, earthquake protection of buildings, atomic force microscopes for imaging single atoms). Detailed theories of the behaviour of atoms and molecules (in solids and gases) are applications of SHM. Other aspects of SHM are at the heart of unsolved questions in physics today. Thus although the model oscillators that students meet appear rather basic, they mirror pretty well applications and problems far beyond the school laboratory.

The key aim is to get across how to recognize SHM experimentally as well as the features that are built into the theoretical model of SHM.

Using the apparatus of the earlier demonstration, set one oscillator in motion. Now change the amplitude. What do you notice about the time period of the oscillation? (It doesn’t change.) This is obvious if a motion sensor is used.

Try with the others.

This is a characteristic of SHM; the period is independent of the amplitude, and we say that the motion is isochronic.

Your students can try out some other oscillating systems; are they isochronic? Do they appear to be SHM?

Set up a circus of experiments (see below). Students in pairs try out a selection and report back to a plenary session. 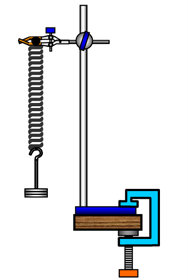 Demonstration: Sinusoidal graphs on a CRO

Set one or more of the masses oscillating. Ask: what would a displacement-time graph for this look like? You can show the graph using the oscilloscope. Switch on the time base to see the sinusoidal graph as it is traced out. Emphasize that the graph produced is a sine wave or a sinusoidal variation.  Alternatively show the motion with a computer and a motion sensor. A pendulum with about a 2 m string and a suitably large bob, (large coffee can with some sand) works well. The Trolley and spring system works well for slow oscillations. A card may be needed on the trolley so it is picked up correctly by the sensor. Be safe: when fixing a string to a high point, two persons are needed – one to hold the ladder or steps and one to do the job.

(If your signal generator will also generate triangular and square waves, show the oscillations these produce with the timebase off. Ask for predictions of the displacement-time graphs.)

A more challenging question, which you may wish to leave until later: What would a velocity-time graph look like? (Also sinusoidal, but maximum value when displacement is zero.) And acceleration? (Sinusoidal, but 180 ° out of phase with displacement.)

This episode reinforces many of the fundamental ideas about simple harmonic motion (SHM).

The previous episode laid the qualitative foundations for what follows here: a mathematical approach to simple harmonic motion...

This episode and the next focus on practical simple harmonic motion (SHM) systems.