This episode introduces the mechanical properties of materials: often an important consideration when choosing a material for a particular application. It focuses on the strength and stiffness of materials when subject to linear tensile or compressive forces (i.e. forces acting along a line in one dimension). Shearing forces (acting in a plane or two dimensions) or bulk forces (acting throughout a volume or in three dimensions) are not covered here.

The topic of Hooke’s law is likely to be a revision of existing knowledge.

Start with a recap of Hooke’s law. As a visual aid add 1 N weights (i.e. 100 g masses) to a suitable spring. If you also have a compression spring then so much the better. It should be apparent that

(Note: although many text books simply use x for extension when discussing Hooke’s Law, it is helpful to use Δ x to avoid confusion later with the original length x when discussing the Young Modulus.)

Note that a pair of forces are involved when applying a tension or compression. If only one force acted on the sample, it would be unbalanced, which implies the sample would accelerate. If you suspend a spring from a support and hang a weight from it, the weight is one force; the other is the upward force provided by the support.

This is a mathematical statement of Hooke’s law , where k is the stiffness , equal to

the tension per unit extension = F Δ x , with units N m-1. (The opposite of stiffness is the compliance .)

Students can perform some careful experiments to see if fibres (rather than springs) obey Hooke’s law.

All materials will show Hooke’s Law behaviour up to a point. This point is sometimes called the elastic limit. However, this is a simplification. Technically:

The linear part of the graph ends at the limit of proportionality.

The elastic part of the behaviour ends at the elastic limit.

These two points do not necessarily coincide. Behaviour is described as plastic beyond the elastic limit.

Loading many types of material (such as metals) simply stretches the bonds between the atoms from which it is made. The linear relationship between extension and load is simply a reflection of the fact that the bond force is varying linearly with the separation of the atoms. Plastic behaviour results from the permanent displacement of the atoms from their original positions. 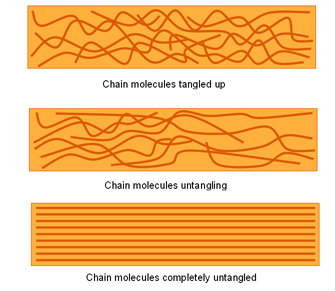 Many polymers (e.g. rubber) show very large extensions – far too large to be explained by bond stretching. Initially it is the uncoiling and/or straightening out of the long molecules that takes place. When they are all pulled straight, the sample gets much stiffer as bond stretching takes over.

Stiffness k obviously depends upon the actual material; it also depends on the dimensions of the sample. Thicker samples stretch less per newton than thinner ones. Imagine two identical samples in parallel – twice the cross-sectional area A implies half the extension for given load, as each sample supports half the load, so k for the system as a whole is doubled.

What about two identical samples in series? Both are subjected to the same load, thus each stretches the by the same amount, so the total stretch is doubled, so the stiffness for the system as a whole is halved.

Check the above conclusions in a demonstration using (identical) springs in parallel and in series.

Our use of materials characterises our history (Stone Age, Iron Age, etc.) and new...

A range of websites and resources containing useful questions for students on properties of matter.

Hooke’s law was generalised to three-dimensional materials by Augustin-Louis Cauchy. However, the stress of physics was not...

Getting your hooks into Hooke

Robert Hooke is immortalised in his eponymous law. However, he made at least two errors in its application. First,