Power is the rate at which work is done, i.e. the rate at which energy is transferred by a force. It is likely that your students will be familiar with this definition. They may also have studied power in an electrical context.

Many of the practical activities suggested earlier in this topic could readily be adapted to relate to power; simply measure the time during which a force acts, and calculate: power = work donetime taken.

Discussion: The meaning of power

Give the definition of power – this will probably be revision for your students. Ask for the unit (watt, W) and its relationship to SI base units

A car engine provides a forward force of 1000 N. If the car is travelling at , what power is developed?

From this example, you can point out that we could equally have used an alternative form of the equation for power:

power = force  ×  distance (in direction of the force)time taken,

(However, this only works if the velocity is steady, i.e. the force is not the resultant force on the moving object.)

Students can perform various physical activities, for example lifting measured weights, and deduce their useful output power, using a stop watch. (Note that the human body is not very efficient in these activities, so the actual power dissipated by the student will be considerably greater than deduced here.)

This is included as it is possible that some of your students are less than confident in this area. It is expected that the majority of students will have already covered this ground. 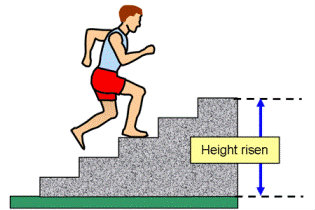 The first questions are warm–up exercises which should give students confidence. Note that the first question makes the connection between power, force and velocity (power = force × velocity).

For some students, this will be a revision topic on fairly well understood themes...

This episode extends the ideas from energy stored kinetically (and velocity) to braking distance and work. Two experiments are...

In these episodes, students can perform some useful experiments with trolleys, weights, pulleys etc. It will help if you...