This episode starts by considering the forces acting on a falling body in air, and moves on to related experimental work.

As an introduction to the lesson the following questions can be posed to the class. During the discussion, you will be able to introduce and define the terms upthrust, drag, air resistance, lift and terminal velocity.

Why does a piece of paper fall more slowly under gravity than a piece of chalk if the acceleration due to gravity is the same for all objects? (Demonstrate this.)

If an object is falling through the air with constant velocity, what can you say about the net force on the object?

How do the forces on an object vary as the object accelerates from rest?

The discussion should lead to the concept of an object reaching terminal velocity when the drag force has the same magnitude as the accelerating force. This can be shown clearly in a diagram such as this:

A useful exercise is to ask a student to sketch the velocity-time graph of a skydiver who accelerates to terminal velocity and then opens her parachute.She will decelerate to a new, lower terminal velocity. You can use a toy parachutist to illustrate this.

The concept of upthrust is most easily introduced using a toy helium balloon (see Balloons – Party in Yellow pages). It will accelerate as its upthrust is greater than its weight, but will reach an upward terminal velocity when upthrust = weight + drag. If you have a high stairwell you can try taking measurements with students standing at different heights and timing the passage of the balloon – fun if you have the time.

An aeroplane is flying at constant velocity (and therefore at constant height). The net force on the aeroplane must be zero. How are the forces balanced? The forward thrust provided by the engines balances the backward drag of air resistance; the downward weight of the plane is balanced by the upward lift on the wings.

This lift is often explained by the Bernoulli effect – faster moving air over the top of the wing produces a pressure difference and an upward force. There are many easy demonstrations of this effect – the simplest being to blow between two sheets of paper causing them to stick together. However, you need to be a little careful with this explanation; remember that planes can fly upside down. The angle of the aerofoil is also important. You may prefer to avoid mentioning Bernoulli and simply say that the wing of an aircraft is shaped and angled to push air downwards; since there is a downward force of the wing on the air, there will be a corresponding upward force of the air on the wing (Newton’s third law); this is the force we call lift.

Students will now be familiar with drag, thrust, lift, upthrust and weight.

This works well if you make sure that the students are thinking about the questions posed. The activity itself is trivial but a lot of good physics can be brought out. It follows on very well from the introductory discussion and some students will find it useful to sketch force diagrams to help their answers. A written discussion of what the investigation shows could usefully be left for homework. 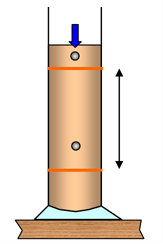 A more quantitative investigation of drag and terminal velocity is to observe the motion of bodies falling through a viscous medium. This is a rich area for student investigations but can be carried out as a demonstration by the teacher with students making measurements.

Start by dropping a ball bearing through the fluid. Can your students describe its motion? (At first it accelerates; acceleration gradually decreases to zero, when the ball has reached terminal velocity.)

The physics behind the demonstration is Stokes’ Law and you can use this as an opportunity to discuss this or just remind students of a little kinematics as they analyse the motion of the falling ball bearing.

This topic concerns resistive forces against motion. It begins by considering drag...

The fast and the slow

Cracks in glass plates can travel at speeds from 1 m/s to 1,500 m/s depending on the length of the crack and the stresses in...

A selection of videos to use remotely with your students when teaching about Forces and Motion.

There is much opportunity for student investigation in this area. You will also need to consider the depth of treatment you...