This episode looks at the independence of vertical and horizontal motion. It concerns objects accelerating vertically when projected horizontally or vertically. The crucial concept is that vertical acceleration does not affect horizontal velocity. This explains all projectile motion. You can discuss why this is the case dynamically – but this is best left until later in the study of mechanics. Getting the basic concept across should be your priority. Similarly, make it clear that you are ignoring any effects of drag at this stage.

(Note that a projectile is an object which is initially projected by a force, but which then continues to move freely under the influence of gravity; a rocket which is firing its motors is not a projectile.)

Discussion and demonstrations: Motion in a parabola

Here are two quick demonstrations showing motion in a parabola.

The first is a quick, fun demonstration that focuses the students’ minds on parabolic motion. This is something we all know but this episode is all about explaining the motion. Follow this with the diluted gravity demonstration.

Having successfully obtained a parabola the following tasks can be used to move the students’ understanding forward:

Describe the motion, as precisely as possible, in words. (No hand waving!)

Further pointers: Ignoring air resistance, is anything resisting the horizontal motion? (No!)

Will the acceleration due to gravity be different for a horizontally moving object? (No, again!)

You can use Multimedia Motion to generate a graph of projectile motion which clearly shows the independence of horizontal and vertical velocities.

In many cases uvertical is zero. 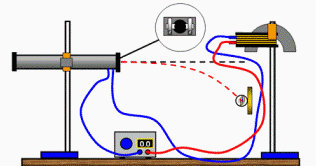 The idea that vertical and horizontal motions can be considered separately is demonstrated in a dramatic fashion in the classic monkey and hunter experiment.

You need to set this up in advance and check that it is working. When it does work it is a superb illustration. Questioning should focus on why this demonstrates independence of horizontal and vertical motion – both objects have fallen the same distance in the same time.

Water droplets also follow a parabolic path in the air. This gives another clear demonstration of the effect. Again, concentrate on the explanation in terms of independence of horizontal and vertical motions.

Here is an interesting approach to projectile motion in which students fire a marble towards a target. This gives students, working independently or in pairs, an opportunity to design a simple experiment that will give them practice using the SUVAT equations.

The students should begin by considering vertical motion. If they set their launcher x metres above the sand pit, the time the ball will be in the air can be found from: svertical = uverticalt + 12at 2 where svertical = x and uv is 0; hence t =     2 x g

From the horizontal range, the horizontal velocity can be calculated. This value can be used to predict the range when the height above the pit is changed to 2x , 3x , 4x and so on.

A table can be constructed with the following headings:

Keen students can extend the investigation to consider the effect of gravity in the sport of archery.

In this topic, students learn to describe motion in terms of displacement, velocity...

The invention of the air bag

The inventor of the air bag, John W Hetrick, attributes his invention to an accident that occurred when he was out a Sunday...

A number of scientific investigations have studied the motion of falling cats. Galileo had one of the characters in his...