Although many students will be familiar with the definition of vector and scalar quantities others may have glossed over these ideas. Such students may feel nervous about vector quantities and will find simple mathematical analysis quite daunting at the outset. This is particularly noticeable if this topic is taught early in the course. It is important that students get a feel (literally!) for vectors alongside an understanding of their mathematical representation. It is worthwhile spending a little time on this introductory episode even if your specification does not make reference to it as it supports the work on moments and turning effects.

It is valuable to use practical work, computer simulations and pen-and-paper exercises to build student confidence in this topic.

For some students this will be a revision session. Others may be less familiar with the concepts. Use question and answers to establish the knowledge of the group.

Start by defining the vectors as quantities with magnitude and direction. Compare these to scalar quantities (magnitude only). Use class discussion to develop a list of vector and scalar quantities (e.g. vectors: velocity, displacement, force; scalars: temperature, speed, distance, energy). It is useful to spend a little time on the difference between velocity and speed.

Discuss examples of simple, parallel vector addition. For example, a bullet fired from a moving train or a sled pulled across the snow against a constant frictional force. These easy examples build confidence in the basic principle. Extend this to anti-parallel vectors (i.e. vectors in opposite directions along same line; they subtract).

This leads to a consideration of non-parallel vectors. Begin with vectors at right angles.

This demonstration takes a little time to set up and is over pretty quickly. However, it is worth the effort. You can perform the presentation with one student helper or you can act as a conductor of two student volunteers.

Make clear that the ink trail is the result of adding two perpendicular velocities.

Measure the duration of the journey to establish the three velocities.

Repeat the presentation with a clean sheet of paper. This time have the horizontal trolley moving at a new velocity to give a different gradient to the ink trail.

Draw a cleaned up version of the results on a board or ask the students to do this in their notes. The diagram should include a scale so that direct measurements can be taken. You will get something like this.

It can be seen that the magnitude of P can be calculated using Pythagoras’ theorem:

This can be checked against the results from the presentation. It can also be seen that a scale diagram can be used to predict the magnitude of P if the two horizontal and vertical components are known.

This can also be checked against the results from the presentation. This is the resolution of the velocity P into horizontal and vertical components. Further discussion will show that:

Students should note down these important relationships which will be used in the worked examples and student questions. 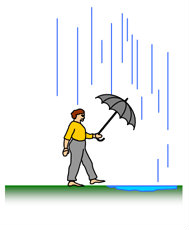 Your students can now put the theory to test, weather permitting! This activity begins with adding orthogonal vector displacements which will confirm the class discussions. The third activity sums displacements which are not at right angles. The simplest method of estimating the sum is to use a scale drawing – this may require explaining and extending to the general principle of the vector triangle. Students should be asked why Pythagoras cannot be applied to the third situation.

This should be considered as a quick activity to consolidate various ideas. Some students will believe that they know all about this; nevertheless, the practice is useful.

Make the addition of vectors by scale drawing explicit – a diagram such as the one below should be included in the discussion; in each case, the red arrow is the sum of the green and blue arrows.

Use these examples to back up the work on vectors at right angles. The third part of the question is more difficult and shows the care needed in tackling such problems. The question is rather long and could be started in class as a discussion and left to finish for homework.

This standard question will enable you to identify those students that have grasped the basic idea.

This topic builds up an understanding of the conditions needed for an object to be...

Filling or emptying kinetic stores necessarily involves speeding up or slowing down mass. It's an accumulation of the power in...

Starting out on calculations

Describing the world using forces can be tricky, since you cannot see them.

The definition of mass in terms of the amount of stuff is the one which is commonly used in school science. We suggest you do...