Energy costs for travelling a kilometre

A range of factors are likely to affect your choice of mode of transport. These might include the weather (no cycling today…It's too wet!), or the speed at which you want to go (… but I've got to be there in ten minutes!).

Looking at the figures, it is clear that the energy cost per kilometre rises quite steeply for the bicycle as the speed rises. In fact it is quite tiring to cycle along at high speed. In such cases, it is important for the rider to be aware of how quickly their energy budget is being spent, and to consider the rate at which her store of energy is emptying (not wanting to exhaust energy supplies with half of the journey still to go). In just the same way, you may want to keep an eye on the state of your petrol tank as you drive.

Power requirements depend also on speed 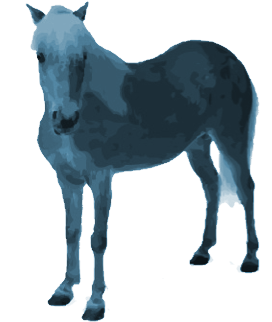 Humans can work steadily to shift about 75 joule a second, or 75 watt. That is about 10 % of what a horse could manage, so humans work at 0.1 horse-power. Having a standard horse-power was important early on in the development of steam engines, as the engines were used largely for pumping water out of mines, replacing horse driven pumps. Any prospective buyer of these new engines needed to know how many horses the engine could replace. Consequently the horse-power of the engine became a critical selling point. In saying how much water each could lift in a fixed length of time, a common currency once again came into play. Now you would make the comparison in watts.

Later, steam locomotives came to drag trains around, and again the common currency became important, this time to inform the train operator of the ability of the locomotive engine to get a train up to speed. This would require a certain number of joules, and the operator would want this to be done within a certain time. In other words, they needed to choose a locomotive whose maximum power was greater than or equal to the power needed.

The key point about energy presented here is that analysing a problem in terms of energy does not tell you what will happen, but it does tell you what cannot happen. Choose a locomotive with insufficient power and you cannot get the train up to speed in time. Choose a locomotive with plenty of power and you will be able to, and you may still choose not to push the engine to its maximum power. Simply having enough power or energy available does not make an process happen. In exactly the same way, having lots of cash does not mean that you will necessarily go out to spend it on certain goods. It simply means that you have the chance to spend. If you have no cash you certainly cannot spend it, and so some courses of action are not open to you.

The relative power of different models of car is of interest to many, and may well be quoted in sales literature.

These are some power figures for a selection of cars available in the UK:

Bigger power figures (as for the Rolls-Royce and the Jaguar) have two consequences: if pushed to operate at maximum power, these cars will burn petrol at a greater rate, thus costing more to run the car per hour, and they will also reach the speed limit sooner, with all other things being equal. Again the fact that you can achieve a higher acceleration does not mean that you must do so. The figures quoted are the maximum working power for each car.

Pupils need to get hold of the idea that energy is always conserved.

Pupils need to develop the idea that energy stores often depend on more than one physical object.

Controlling the rate at which energy is shifting (the power) has been, and remains, a central concern of technology. Directing...