This is the second post about situations in which we are drawn into including intermediate stores as part of an unhelpful chain or ladder. This post is a bit like an appendix, in which I will look at the example of a hydro-electric power station. So it is worth reading the overview first.

There are a number of situations for which there is a temptation to introduce chains of intermediate stages when a process is still occurring. They include:

In the previous post, I looked at the example of the rising mass. In teaching schemes and assessments of the recent past (using types and transformations in the way that it had come to be used), student would be expected to reproduce an analysis something like:

I made the case for this chain being confusing and unphysical. And that spending time in teaching students to reproduce such chains is unhelpful because they are:

I also suggested ways in which the analysis can be made more physical and educationally helpful. And they are to:

I will endeavour to illustrate this approach with some of the other examples and hope to show that the resulting analyses are more helpful for learning good physics. First, let’s look at HEP. In the next post, I will look at electric circuits.

B. The hydro-electric power station

A good example for illustrating the ambiguous nature of chains is a hydro-electric power station. 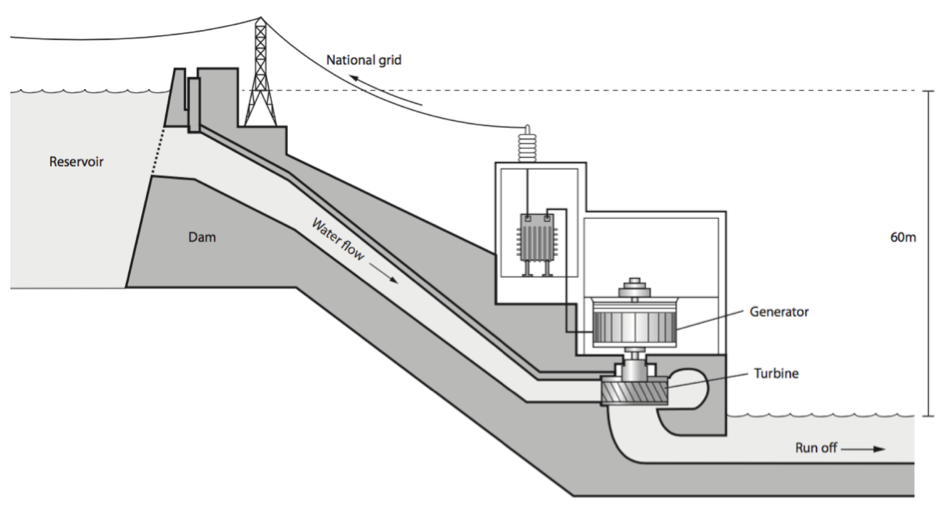 The physics story (in brief) is: during a day, water drops from a high reservoir to a low one. In doing so, it turns turbines that drive generators, which generate an EMF. The output of the generator is connected to the National Grid. When someone switches on a kettle, the element draws a current from the national grid and its temperature rises as electrons are forced through its high resistance. The hot element then raises the temperature of the water by heating. Furthermore, during the time it takes to boil the kettle, a number of parts of the system (including the wires, the transformers and the water itself) will have got hot and raised the temperature of the surroundings by heating. Some bits will have been noisy; however, the sound waves will have been absorbed by the surroundings and raised their temperature a little.

All of the paragraph above is about mechanisms and processes. They may well need refining and each mechanism could be explored in more (or less) detail (of our choice when we tell the story). But we could probably agree on the physics.

First we need to choose start and end points that make the story simple and illustrative. I suggest taking a start point just before the kettle is switched on and an end point as the water boils.

The basic energy story is that

You could show this change graphically: 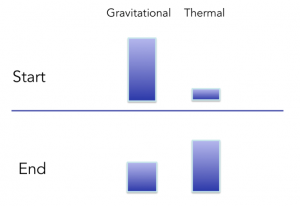 We can embellish the story a little by including the idea that the hot water will raise the temperature of the surroundings (a little). Putting this into the language of stores, we can say:

Again, this can be represented nicely in a diagram: 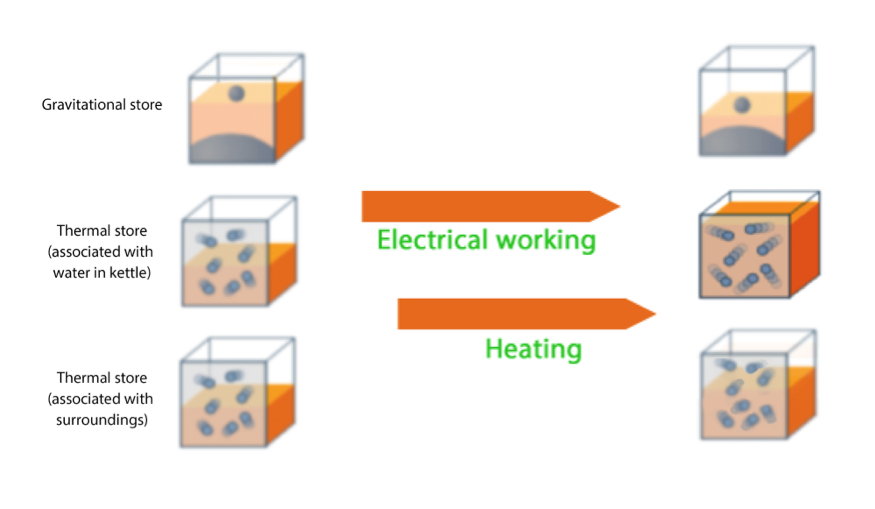 By choosing start and end points that pass over all the intermediate considerations, we have, I suggest, avoided obscuring the physics, misleading students, confusing them with arbitrary choices and ambiguous decisions. Instead, the approach is enlightening and, amongst other things, prepares them for performing informative calculations using energy ideas.

By contrast, the approach from the recent past, using a chain of types of energy and conversions or transformations:

As I mentioned above, it is better to think of the HEP station as a transmitter of a force and to discuss energy being transferred through mechanical working rather than energy being carried by an intermediary.

A similar problem arises in electric circuits – where there is a temptation to paint a picture of charges carrying energy around the circuit (rather than energy being transferred by electrical working). I will follow this up in the next post.

A model of growing crystals

Demonstration: This model shows crystal growing by the addition of more polystyrene spheres.

The thermodynamics of wet pants

An unusual piece of thermodynamics research is presented in a paper: Impact of wet underwear on thermoregulatory responses and...