EMF is an abbreviation for electromotive force. It is a measure of the ability to drive an electric current. The EMF of any electrical power supply, such as a cell, a battery or a dynamo, is defined as the work that the supply would do, per unit charge, to move charge around a circuit if the supply were connected into the circuit,

where ℰ is the EMF of the supply, and W is the work done in moving charge Q around the circuit.

For historical reasons its name includes the word ‘force’, but it is important to recognise that an EMF is not a force.

An EMF may be generated, for example, by chemical reactions, as in a cell or battery, or by changes in the magnetic flux through a circuit, as in a dynamo or generator.

where the quantity Ir is the difference between the EMF of a power supply and the potential difference across its terminals, and is sometimes referred to as the ‘lost volts’. See Figure 1. 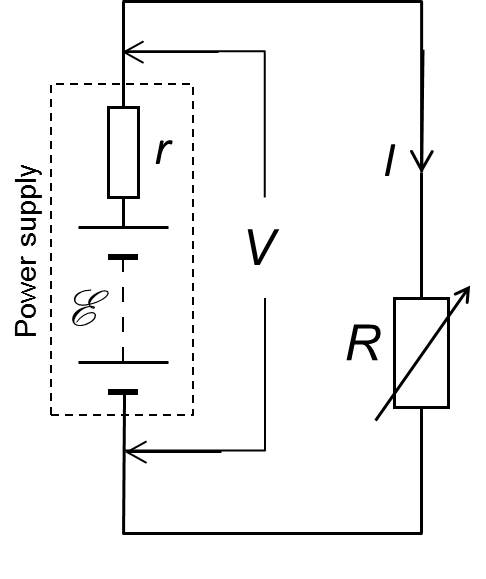 where ℰ is the EMF of the supply, and W is the work to move charge Q round the circuit. ℰ = -d(NΦ)dt

is the EMF induced in a coil with N turns. Here, N is the number of turns in the generator coil and Φ is the magnetic flux through each turn of the coil. V = ℰ − Ir

A typical fresh alkaline manganese cell with a terminal potential difference of 1.5 V, and an internal resistance of 0.21 Ω, driving a current of 250 mA has an EMF of approximately

Each of the six generators at Drax Power Station in Yorkshire produces an EMF of 23,500 V.