Infra-red radiation has a greater wavelength than visible light, and is easily measured with a coarse diffraction grating. Beyond the infra-red, radio waves continue the spectrum out through microwaves (short radio waves) to long radio waves with wavelengths measured in hundreds of metres.

Ultra-violet light has shorter wavelengths than visible light, measured by fine gratings operating in a vacuum to eliminate absorption by air. X-rays have far shorter wavelengths, usually less than 10-10m. A fine enough grating cannot be made, and so instead layers of atoms in a crystal are used.

These radiations are all part of the electromagnetic spectrum. You cannot see such a vast spectrum spread out across a screen. Only a tiny section is visible as light to which your eyes are sensitive. The methods of producing radiation in the various sections are different and so is their detection. Yet all the radiation, throughout the spectrum, travels with the same speed in a vacuum, and the radiation in each section can produce diffraction and interference effects. This shows that it consists of waves. These waves consist of varying electric and magnetic fields.

...the wavelength scale used is one in which equal ratios of wavelengths are plotted rather than equal differences. For example, wavelengths 1 m and 100 m are spaced the same distance apart as wavelengths 10-2m and 1 m, and 10-6m and 10-4m. This is like the scale of octaves used in music, where a jump in the scale of one octave means a doubling of the frequency (and halving of the wavelength}. Such scales are called logarithmic. 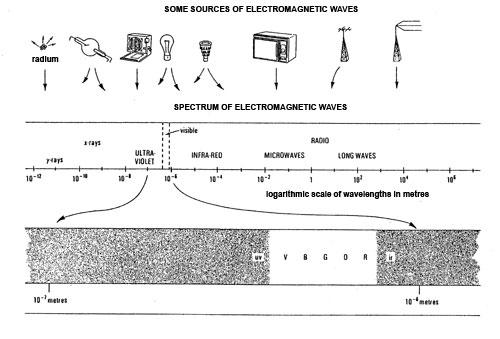 Experiments in this collection begin with Newton's experiments, showing that white...

Galileo and the speed of light

This activity involves telling a story, which you can use as a means of starting a discussion about the role of measurement in...

Class practical: This is a recreation of Herschel’s experiment, published in 1800, in which he discovered infra-red radiation...