Electrolysis of water and the concept of charge

The electrolysis of water yields oxygen and hydrogen gases and simple calculations estimate the charge of the ions.

Do not ignite the hydrogen gas directly in the burettes but sample it as described below.

0.4 M sulfuric acid is not hazardous.

The Worcester voltameter kit consists of two 250-ml burettes mounted vertically so that they will fit inside a tall gas jar (see diagram). The electrodes consist of stiff wires covered with plastic insulation except where they are within the inverted burettes. Ideally, these tips are plated with platinum. The advantage of this design (which many schools have) is that the glass items are standard and easily replaced when broken.

The Hofmann voltameter is an alternative piece of apparatus. It is expensive and easily broken, but many schools have one. There is also a mini-version consisting of two small test-tubes in a small trough.

Although this is traditionally described as electrolysis of water, showing that an electric current can split water into two volumes of hydrogen to one of oxygen, it is a little more complicated. Pure water contains few ions so the process is very slow. To obtain results in a reasonable time, sulfuric acid or another electrolyte is added. See the CLEAPSS Laboratory Handbook (section 11) for a fuller discussion (in colour on the CD}. For the oxygen problem, see teaching note 2. 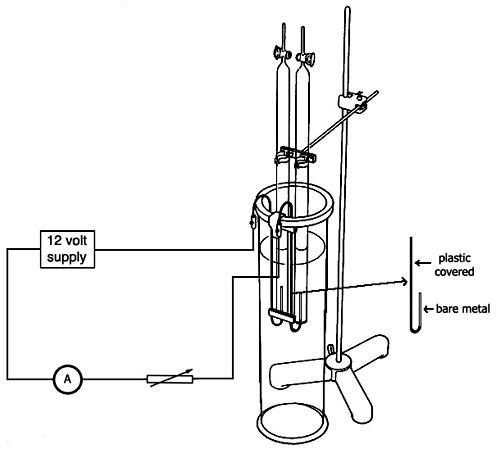 These activities will help students to relate the idea of current (as shown by an...

The electric current at a point in a circuit is defined as the rate of flow of charge past that point.

Voltage/current relationship for a gas

Demonstration: gases conduct electricity, but they have to be ionised first.