One of the first estimates of the speed of travel of electrical currents was made from a bizarre experiment carried out by the French clergyman and physicist, Jean-Antoine Nollet. 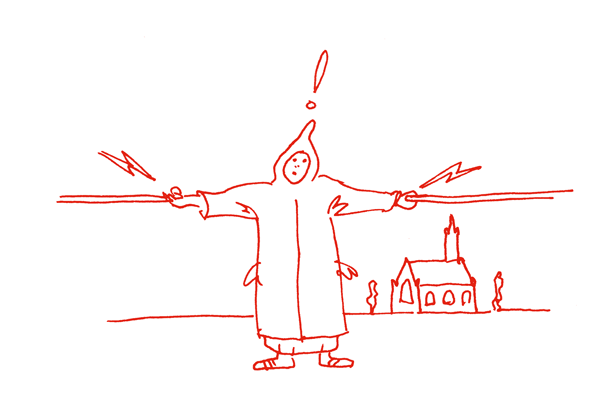 In 1746, Nollet arranged for 200 Carthusian monks to form a circle. The monks held 7.5 m brass poles in each hand, creating a circular chain with a circumference of about a 1.6 km. When he connected a Leyden jar (an early charge storage device) into the circuit, the unfortunate monks’ muscles contracted as they experienced an electric shock.

Nollet had intended to measure the speed with which the current travelled, but he observed that the monks at different places in the circle reacted at the same moment, leading him to the conclude that conduction occurs with “unlimited rapidity”. Nollet also discharged a Leyden jar through 180 Royal Guards in the presence of King Louis XV.

Nollet’s work has a modern application. He observed that, when a person was connected to a high voltage supply, and cut, rather than bleeding normally, blood would spray from the wound. The rather gruesome discovery, known as electrostatic spraying, is now applied to the more prosaic process of electrostatic painting.

Johann Ritter is perhaps best known for his discovery, in 1801, of the rays that subsequently became known as ultraviolet...

A transistor as a current amplifier

Episode 102: Current as a flow of charge

Here, you are trying to illustrate the idea of electric charge and its relationship to a flow of current.