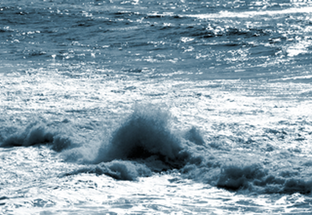 What happens here affects what happens over there: that is the essence of radiating. An influence travels from source to absorber without stuff making the trip. The amplitude and frequency of the source partially determine the effects at the absorber. The nature of the absorber and the details of the trip (setting the fraction of the emitted photons striking the absorber) complete the description.

Most absorbers or detectors receive radiations from many sources and usually we think nothing of this: two appropriate sources illuminating one detector normally produces no special effects, except that the detector records a higher intensity. But there are very particular conditions where special effects can be noticed, even for very high frequency radiation, like visible light.

Rather spectacular effects are experienced when two sets of water waves meet, perhaps around a seaside headland.

As a large positive displacement from one set of waves meets a similar displacement from another, so a temporary mountain of water is created: the detector (the water where the waves meet) has a very large displacement, often both positive and negative in a short sequence. Such clapotis phenomena can be hugely impressive, although you are more likely to notice more moderate examples where reflected waves from a sea wall or cliff meet incoming waves.

These messy, transient, mountains and pits of water may well have analogous phenomena in light, but the changes are so much more rapid that no detectors can show them up (remember that the frequency of light is very high).

Both frequency and amplitude are defined by the source of the radiation. If you move away from the source then the trip time also determines how that source contributes to the vibration at a later point.

That is why it may be helpful to talk about the contributions of vibrations from different sources rather than waves or radiations meeting. Radiations and waves are both more general terms and do not spell out the details. Here we aim for the details, so that you can see how waves and radiating works.

In this episode you'll meet the phenomena that are particular to radiations, as these depend on frequency. They depend on something vibrating, and so were instrumental in the increasing acceptance of the wave theory of light in the 19th century as a series of experiments showed that light did indeed exhibit these phenomena. In this episode you'll see how these new phenomena can be accounted for by linking the frequency of a vibration with the trip time between the source and the detector. This trip time, the journey time from the source to the detector, is determined by the distance between the two and the speed at which the information about the changes travels. Do like me – but later is still the idea that we suggest you build on.

In and out of step: a relationship between two vibrations

Two vibrations of the same frequency can be in or out of step as they are emitted from their respective sources. As they travel, so this relationship between them may alter as a consequence of the journey times (the trip times) between the source and wherever we place the detector.

Beating: an effect produced by superposition

Two vibrations arriving together at a point superpose. Each one contributes – it conveys information to whatever is vibrating: particles of water, air, steel; electric and magnetic fields. This information is a rather simple set of instructions about a set of displacements resulting in the same pattern of vibration that originated in the source. That is where the phrase do like me, but later came from.

Being in step is often called being in phase; being out of step, out of phase. A fixed phase relationship between the two results in beats, as shown here.

With just amplitude and frequency and the sine or cosine function, we can specify a whole range of simple vibrations that vary in systematic ways. Combine these varied contributions to build up a complex vibration. Unlike clapotis, maintain a regularity of input: then you'll get a very regular output. So you can build up time traces that are square or triangular, or indeed any chosen shape, given enough determination to find the correct contributions, specified only by their amplitude and frequency. This is both remarkable and powerful.

You can also start with a complex vibration and split – or analyse – that vibration into its component contributions. This is Fourier analysis, and is the basis of voice-prints, optical spectra, earthquake analysis, and many other helpful descriptions of vibrations.

Each complex vibration can be defined exactly by listing the amplitudes and frequencies of is component contributions. These arrays of numbers can then be compared with other arrays to identify the vibration (whether it be starlight, an earthquake, or a performance of a piece of Mozart). You can even feed the numbers back into a Fourier synthesiser to recreate the pattern of the original vibration. Synthesisers do just this: whether for music or for voice.

In thinking about the production of dark and light fringes on a screen as light passes through two slits to create...

Demonstration: This experiment works as a model of what is happening with light in a thin air film, or thin film reflection of...

Demonstration: waste pipe is used to illustrate interference of sound waves coming from a single source by two different paths...