The whistle of moving steam locomotives may appear to change pitch

Stand on the footplate of a speeding locomotive and, no matter what the speed at which the countryside passes, you'll always hear the same note from the whistle. But stand outside, trackside, in that same countryside and you'll hear something very different: the whistle will be of higher pitch as the train approaches and of lower pitch as it recedes. This change in pitch is the result of the Doppler effect, and you get the same shift in pitch from all radiations where there is relative movement between detector and source. The change in pitch depends on the relative speed of the source and detector, so the effect is not easy to detect until you have rather high speeds: walking won't do for sound, for example. Perhaps this explains why trains are so much a part of the history of the Doppler effect and why its discoverer, Christian Doppler (1803–1853), was alive during the railway age. In the 21st century there are so many high-speed objects that once pointed out, you'll notice Doppler effects everywhere.

As you move towards a source, or it moves towards you, so the pitch of the vibrations increases. As the source and detector separate, so the pitch of the vibrations decreases. This effect is not specific to sound: you can find exactly the same effect in electromagnetic radiations; and you can detect the same effect with ultraviolet, infrared, or X-ray radiation. If the detector and source are moving apart (there is no especially privileged point of view – no absolute axes – so it does not make sense to decide which is actually moving), the detected frequency of the radiation is lower than the emitted frequency.

Looking out into the universe – things appear redder

If, on average, whichever direction you look in, things appear redder than expected, then you might reasonably guess that those same things are moving away from you. If things are moving away from you in all directions, and you don't think that there is anything special about where you are standing (so if you moved a few paces, or perhaps light-years, to the left you'd see the same effect), then the best guess has to be that everything is moving apart from everything else. This is the chain of reasoning that leads to the belief that the universe is expanding.

Notice that it is not simple or straightforward: for example, there is quite a lot hidden in the statement things appear redder than expected. On what basis do we have this expectation? It's quite an extrapolation from what you can observe in the laboratory to speculate how red we'd expect the emissions from a particular part of the universe to be with no relative movement between us and that part.

A physical analogue of the Doppler effect 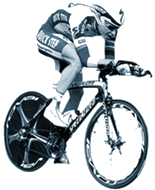 In a bicycle time trial, the riders set off from the start at regular intervals and arrive at the finish at irregular intervals, because they travel at different speeds. Not so for photons, which always travel at the same speed, so if they set off from the source at regular intervals, they'll arrive at the detector at those same regular intervals. In fact this constancy of interval will also apply to any travelling radiations, since these also travel at a constant speed: blips from adjacent pulses leaving at a fixed interval will arrive with that same fixed interval intact. Unless something odd happens to the start or finish lines, the emitted frequency will be the same as the detected frequency.

Some bicycle races are run under handicap (the parents' race at school sports day is another example – often having a start line set by the decade of the starter): the start line, or the finish line, is not in the same place for all: not all riders cover the same distance, and this too can affect the interval between riders. This applies also to photons, even though they always travel at the speed of light, so covering the distance from source to detector at a constant rate.

One can even imagine races where the start line or finish line moves at a constant rate, so that the interval between photons, or blips, is increased or decreased by a constant amount. The larger the relative speed between source and detector, the greater this increase or decrease. This steady alteration of the distance that the radiations must traverse between source and detector is exactly what happens in the Doppler effect.

Your friend will hear the pitch of the egg timer change as it moves around your head - but you won’t hear any change at all...

The universe is expanding; don’t confuse this with the big bang (see episode 705: Cosmology).

A selection of videos to use with your KS5 students (ages 16-19) to support and develop their understanding of Light, Sound...