Does a nucleus disappear when it decays?

Wrong Track: When the nucleus decays, it disappears like with the dice. You have to remove each dice when it comes up as a six so the stockpile of atoms goes down.

Right Lines: When a nucleus decays, it changes its composition but the nucleus still remains. For example, when a nucleus emits an alpha particle, it loses two protons and two neutrons but the rest of the nucleus is left behind.

A limitation of the dice model 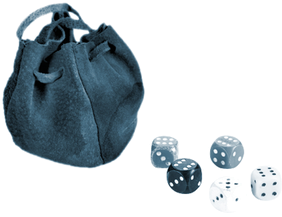 This is an interesting point relating to the limitations of models, which we'd recommend exploring in full with the students:

Teacher: Just think back to what you were doing with the dice. Each time an atom came up as a six, it meant that it had disintegrated, giving out radiation. That atom was then removed from the stockpile of radioactive dice.

Teacher: Can anyone see how this model of radioactive decay differs from what happens with a real radioactive source such as uranium?

Jade: It's not really that the atoms are removed once they have given out radiation.

Teacher: Yes, keep going, you're on the right lines …

Jade: Well, in the model you take the atom away when it gives out radiation. That doesn't happen in real life, otherwise you'd end up with almost nothing there. Each uranium nucleus just loses some particles but most of it is still left behind.

Teacher: Great answer! Perhaps we should just put the disintegrated dice to one side to indicate that they are now stable, but are still there.

What halves during a time period of one half-life? This thinking that underpins this challenge relates closely to the...

The half-life of a sample of a radioactive nuclide is defined as the time interval during which half the nuclei in a sample...