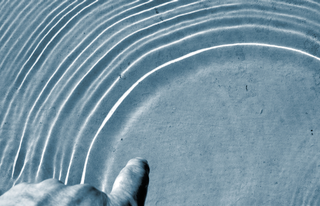 Throw a pebble into a still small pond. What happens in one place pretty soon affects what happens in all. The up and down movement triggered by the pebble radiates uniformly across the pond until it influences all parts of the pond. Looked at from on top or underneath (a bird's eye/newt's eye view), there is a radial symmetry to the spread of the influence: it does not matter in which direction you set out from the point of impact of the pebble to track the spread of the influence, the results are identical. The ripple propagates radially: what happens here now happens over there, but later. Do like me – but later is the fundamental characteristic of a radiation.

A candle placed in the middle of a room does nearly the same in three dimensions. Why nearly? Well, it's not quite uniform in all three dimensions because the flame is not symmetrical in all three planes, and then there are the wax and wick that make up the candle. But we hope you can imagine a simpler candle, with none of these annoying physical limitations in place. Again note the move from the physical to the conceptual, while remaining rooted in the physical.

Then the natural action of such a source, an ideal point source, is to radiate in all directions. But notice how many simplifications you've had to make to get to this natural (so unconstrained) state of affairs. This very simple universe (one point source radiating, no obstructions) does have significant value: you can add complexity and then predict what happens on the basis of what you know about the simple situation.

Simple arguments based on symmetry suggest that there is an equal chance of a photon being detected in all directions, so you'd guess that they are emitted equally in all directions. In such a simple universe, there is no reason to prefer any one direction over another. An equal supply of photons to any detector, placed anywhere on the surface of a sphere, centred on the source, predicts equal brightness in all directions.

Beams of photons are altogether different. A detector placed anywhere except in the beam has a truly tiny chance of detecting a photon, whereas a detector placed in the beam has a large and constant chance of detecting a photon, however far from the source it is placed. Such a beam has a constant brightness, at all distances from the source, but it is as much of a leap of the imagination as the point source. Once again, it is an idealisation, but yet again, a very useful one. To see why it is an idealisation, we'll compare the two kinds of propagation: radial and beam.

Point sources and sources radiating beams are quite different

Rays were used in the SPT: Light topic, to predict beams. They were also used to predict shadows from point sources. The patterns made by these two sets of rays are very different: one set spreads radially and one set are parallel. Yet a long way from the point source it is very hard to tell whether the rays are still spreading: they appear nearly parallel. This is simply a consequence of the geometry.

So, the further you are from a point source, the more nearly the rays model and predict a beam. Here is a summer-time example: Sun-beams selected by holes in a tree canopy and made visible by mist or smoke do appear as beams, not apparently diverging. This is very clear to the eye, even though the Sun is a pretty good approximation to an ideal point source.

Back to the pond, looking for the same process. The vibrations can be both channelled, and a long way from the source, so they are constrained to be a beam. But what happens when you remove the constraint? Now the vibrations do not have to propagate down a fixed route and so can propagate naturally again. The vibrations spread out, reverting to behaving as if there is a point source. The more you constrain them, the more they behave like a point source when that constraint is removed. The narrower the channel, the more the spreading at the end of the channel.

Diffraction: from beam to points source

The fundamental story of vibrations is that influence travels – and that what happens here now (the source) happens over there (the detector) later. The fundamental command from source to detector is Do like me – but later. To that we now add that the natural movement for these vibrations, where they are unconstrained, respects the symmetry of space – there is no special direction.

One can re-describe the same process in terms of photons: there is no preferred direction of emission – photons are emitted as a random hail over both time and angle.

That is the phenomenon. The explanation follows.

Two waves interacting: it is essential to know about the starting conditions

In these first three episodes of this topic, the idea of waves as an explanation for some phenomena has been taken apart and...

There is a long tradition of starting with water waves when teaching about waves and radiation in physics. This makes a lot of...