Droplet by droplet, where droplet size depends on frequency 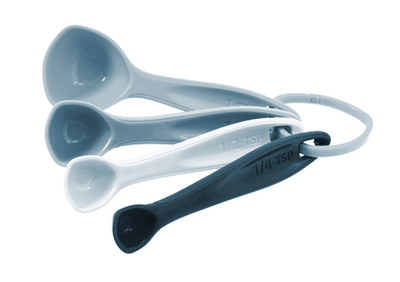 As the store is filled, think of the inbound liquid not as a steady stream but as rather small droplets.

You might think of the pot representing the store being filled by small but variable measures of orange liquid, rather than as a steady stream.

A set of measuring spoons might be used to add the liquid to the pot, each labelled, from smallest to largest, as red photon, yellow photon, blue photon.

More exactly, you might say, photon causing yellow lighting, but you would not want to make a habit of a mouthful like that so the contraction is probably a good idea; just be aware that it is a contraction.

Suitable ratios follow the frequencies of the photons, as the energy shifted is proportional to the frequency, so you might choose:

Teacher Tip: The ratio of frequencies of red light:green light:violet light is 1:1.5:2 and you can model that by doling out orange liquid with different spons, in fact the ratio is teaspoon:dessertspoon:tablespoon.

Research might even reveal a set of coloured spoons of the correct hues in your local kitchen shop.

This is a rather fine review activity, and should be undertaken towards the end of an introduction to the idea of photons.

Rate of shifting energy down a pathway

It's always useful to make links between different areas of learning in physics. Whenever a student says, Oh! It's a bit like...