In the first quarter of the twentieth century physicists began to realize that particles did not always behave like particles – they could behave like waves. They called this wave-particle duality.

This theory suggests that there is no basic distinction between a particle and a wave. The differences that we observe arise simply from the particular experiment that we are doing at the time.

Students should have an understanding of wave phenomena, including diffraction and interference. They should know how to calculate momentum.

This work follows on from a study of the photoelectric effect.

These episodes merely skim the surface of quantum physics. For students who wish to learn a little more, here is some suggested reading:

You can extend the idea of electrons-as-waves further, to the realm of the atom.

The diffraction of electrons was first shown by Davisson and Germer in the USA and G P Thomson in the UK, in 1927 and it can now be observed easily in schools with the correct apparatus.

Show electron diffraction. It will help if students have previously seen an electron-beam tube in use (e.g. the fine beam tube, or e/m tube).

Before giving an explanation, ask them to contemplate what they are seeing. It is not obvious that this is diffraction/interference, since students may not have seen diffraction through a polycrystalline material. (Note that the rigorous theory of crystal diffraction is not trivial – waves scattered off successive planes of atoms in the graphite give constructive interference if the path difference is a multiple of a wavelength, according to the Bragg equation. The scattered waves then appear to form a wave that appears to reflect off the planes of atoms, with the angle of incidence being equal to the angle of reflection. In the following we adopt a simplification to a 2D case – see Episode 506-1)

Qualitatively it can help to show a laser beam diffracted by two crossed diffraction gratings. Rotate the grating, and the pattern rotates. If you could rotate it fast enough, so that all orientations are present, you would see the array of spots trace out rings.

From their knowledge of diffraction, what can they say about the wavelength of the electrons? (It must be comparable to the separation of the carbon atoms in the graphite.) How does wavelength change as the accelerating voltage is increased? (The rings get bigger; wavelength must be getting smaller as the electrons move faster.)

In 1923 Louis de Broglie proposed that a particle of momentum p would have a wavelength λ given by the equation:

The formula allows us to calculate the wavelength associated with a moving particle.

Calculate the wavelength of an electron accelerated through a potential difference of 10 kV.

You may come across a number of ways of trying to resolve the wave-particle dilemma. For example, some authors talk of wavicles. This is not very helpful.

Summarise by saying that particles and waves are phenomena that we observe in our macroscopic world. We cannot assume that they are appropriate at other scales.

It’s a matter of learning which description gives the right answer in a given situation.

The two situations are mutually exclusive. The wave model is use for radiation (i.e. anything transporting energy and momentum, e.g. a beam of light, a beam of electrons) getting from emission to absorption. The particle (or quantum) model is used to describe the actual processes of emission or absorption.

You could extend the idea of electrons-as-waves further, to the realm of the atom. 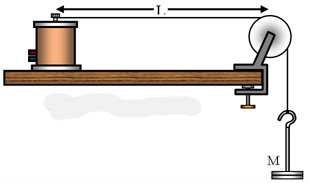 In this section we are going to introduce the idea of standing waves within an atom. It is therefore useful first to demonstrate standing waves on a stretched elastic cord. This is known as Melde’s experiment.

(A very simple alternative to the vibration generator is an electric toothbrush.)

Show that there are only certain frequencies at which standing wave loops occur.

The waves on the string are trapped between the two fixed points at the ends of the string and cannot escape.

This idea was introduced because the simple Rutherford model of the atom had one serious disadvantage concerning the stability of the orbits. Bohr showed that in such a model the electrons would spiral into the nucleus in about 1 × 10-10 s, due to electrostatic attraction. He therefore proposed that the electrons could only exist in certain states, equivalent to the loops on the vibrating string.

Demonstration: Standing waves on a loop

de Broglie waves can be imagined as forming standing waves which fit into an atom.