In this activity, pupils will explore the effects of insulation on cooling.

Get the pupils to think about the effect of adding extra layers of insulation on cooling, perhaps drawing on the activity Modelling cooling.

Show the cooling curve from an un-insulated canister, and get small groups to predict the effect on the curve of adding successive layers of insulation. Record their predictions, perhaps as a series of sketch graphs. Then, if possible, get the pupils to carry out the experiment themselves, recording their results.

Having plenty of apparatus allows the pupils to explore the effects of one, three and five, or none, two and four thicknesses all at once (many data capture devices only have three temperature probes, so this is the principal limitation). The pupils should compare their predictions to the results.

It is important to draw attention to the diminishing returns which are apparent here, as the extra layers are added. Thus adding layer five makes less difference than adding layer two, all layers being of equal thickness. Each layer reduces power by a constant fraction (reducing an effect by a constant fraction is such an important pattern in nature that you might want to draw attention to it here).

In this activity, pupils build a model to explore the effects of insulation on cooling. 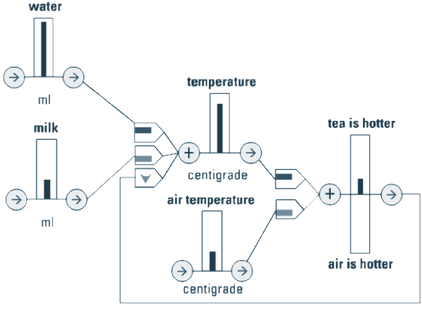 This is written as if you will talk the pupils through each step, assuming they do not have much experience with the modelling program. Start with a real cup, hot water and milk. Ask how to get the cup of tea down to just the right temperature. Steer the class towards suggesting that adding appropriate quantities of hot water and milk will get the tea to just the temperature that you want.

So then you can build the model shown.

Run the model and alter the inputs, showing how you can make the tea hot or cold by increasing or decreasing the quantities of water and milk. This is good simple science, simply represented. Allow the pupils to build this far, checking their model as they progress.

Pupils might build this, or you might demonstrate first before letting them have a go. Either way, ensure that at least a few pupils try running the model with the air temperature higher than the tea temperature. Ask what they expect to happen. Is the model wrong? Now remind them that the difference in temperature between the tea and the air influences the cooling of the tea.

In fact, so long as the tea is hotter than the air, then the temperature of the tea will keep on falling. Show this feedback loop with a new kind of relationship, the grow like me link.

Allow the pupils to explore this model, explaining to each other how it works, and following the effects of different values. Be sure to challenge each group to produce a temperature-time graph and see if they can account for its shape.

If you have any pupils who would benefit from a serious challenge, then you might ask them to alter their model to add insulation to their cup. This is tough to model, and requires that the pupils understand that the cooling effect must be divided by the extra insulation – but it's very satisfying to figure out.

This activity looks at the energy losses in a model house and provides an environment where several explorations are possible. Sensible actions rely on reasoning based in convection, conduction and radiation in trying to achieve a chosen goal for the house. There are several possible goals and you need to be clear about what these are. You could set this up as an investigation to find the factors affecting how successfully a particular goal can be reached. Or you could leave it as a relatively open exploration.

Safety note: The heater does get hot. Warn pupils not to touch it.

You want pupils to use ideas of radiation, convection and conduction to keep a house warm. There are several ways they could tackle this. The house could be warmed to 30 degrees above ambient temperature, fully insulated, and then the pupils find how long it takes for the temperature to drop by 20 degrees Celsius. Alternatively, the challenge might be to insulate the house so that it stays at a certain temperature above ambient.

Some things to vary include where the insulation goes, how much of it there is, whereabouts in the house the temperature probes go, which windows are open and whether there is an internal floor. Pupils will be inventive, perhaps even replacing the roof with cling film and asking for a sun lamp!

In all reasonable cases they can be encouraged to build and modify a house as they suggest, showing how it compares to a standard (card) house, and how it improves on this standard for the purposes of the challenge that they are trying to answer. This is a very good opportunity for them to articulate their reasons.

Greater progress can be made by each group having access to a pair of houses and heater bases, plus three temperature probes. This allows them to compare a change to the standard set-up simultaneously. In this case each experimental run takes about twenty minutes. You'll want to ensure that the pupils are constructively engaged in this time, perhaps laying out their reasoning for the experiment. A competitive challenge can help focus the goals. Don't forget that hi-tech building materials are expensive, so encourage them to think and not to be wasteful!

Download the support sheets / student worksheets for this activity.