Transformers are vital to the distribution system for electrical power.

Shows the basic principle of any transformer: a change in current in the primary coil will induce an e.m.f. (voltage) in the secondary coil.

For each student group...

Please note: Strictly speaking, we generate e.m.f. but frequently measure the current through the load resistor (i.e. the wire) using a galvanometer (not an ammeter).

If a zinc chloride cell is used, it will polarize in 60 s or less and must be left overnight to recover.

If an alkaline manganese cell is used, there is a danger of the cell overheating with a risk of explosion: complete the circuit for 30 s or less.

If a rechargeable cell (NiCd) is used, the wire will get very hot and the cell will be discharged in a few minutes: do the experiment as quickly as possible.

C-cores should be stored in their original pairs and clipped together to ensure a good fit and to prevent grit and dirt damaging them.

The slightest gap will dramatically reduce the efficiency of the transformer. 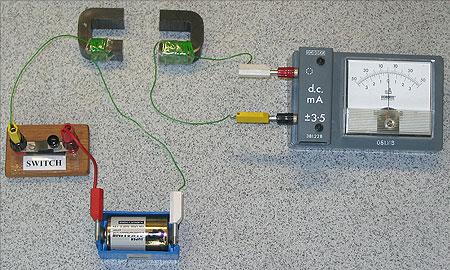 Using lamps and meters to compare the voltages in the primary and secondary coils of a transformer. 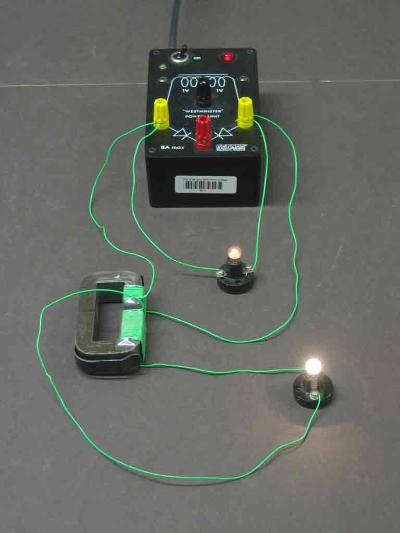 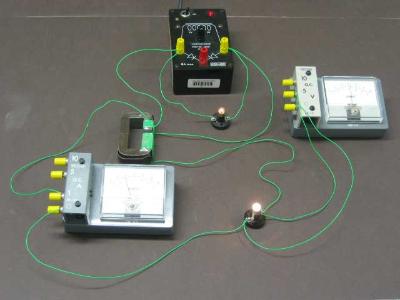 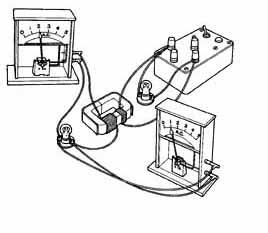 An intriguing demonstration in which a lamp grows brighter and brighter with more turns on the secondary coil of a transformer.

The 1,200 turn coil must be designed for connection to the mains with either a permanently-connected mains lead or a fully insulated mains computer used with an IEC connector (as on computer equipment).

The 1,200 turn coil may overheat if left connected too long.

Oscilloscope and alternating voltage from transformer

Oscilloscope and alternating voltage from transformer

A way of showing quantitatively the relationship between the e.m.f. and turns ratios of transformer coils.

The 12,000 coil must be designed for use on the mains, i.e. the mains lead must be permanently attached or connected via an IEC connector.

The mains lead to the 12,000 turn coil should be permanently connected; 4 mm leads connected to a 13 A mains plug are a serious hazard.

If the coil fitted with a mains connector has only 1,200 turns, reduce the secondary to 30 turns. Do not improvise mains connections with 4 mm leads. 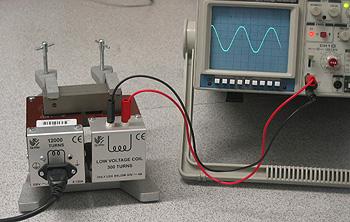 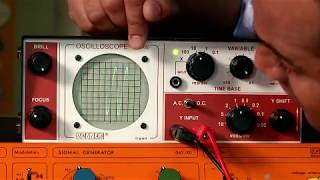 Shows the significant energy losses along any low-voltage transmission line. 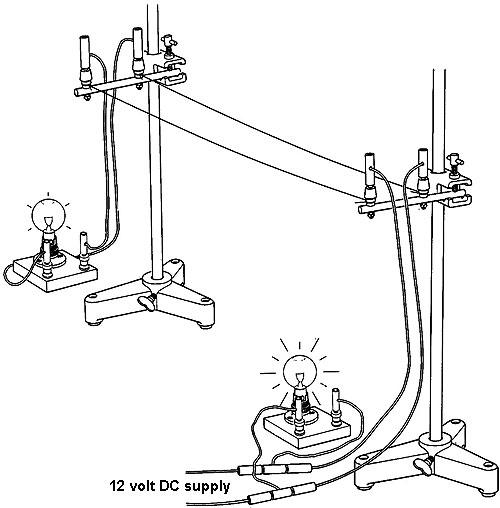 A video showing this practical, plus more efficient transmission at higher voltage:

This experiment shows clearly why the power transmission lines used for the National Grid operate at high voltage.

The power line in step 2 will be at 240 volts. Insulation at the transformer boxes and sleeved wire will offer sufficient protection and is essential. Several teachers have ended up in hospital through trying to manage without it. 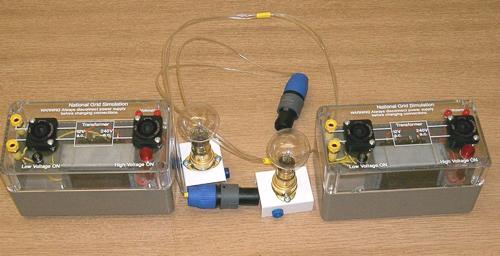 Cut two 1.5-metre lengths of resistance wire. This will produce a significant power loss in the low voltage line. Then cut two lengths of transparent sleeving, about 1 cm shorter. Slide them onto the wires.

To prevent the wire sagging too much between supports, use elastic bands to attach it to a strip of wood or coil it round wooden rods.

Shows the basic principle of any transformer: a change in current in the primary coil will induce an e.m.f. (voltage) in the secondary coil.

Using a power supply with a fixed, low-voltage output and transformers with a small turns-ratio ensures that no dangerously high voltages are produced. Check the maximum voltage that your equipment can produce is less than about 40 V by multiplying the output voltage of the supply by the turns-ratio of the transformer.

Ensure that the second (step-down) transformer is correctly connected, so that the voltage is not further stepped up. 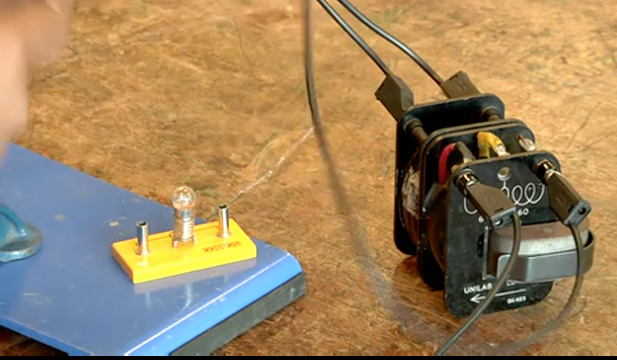 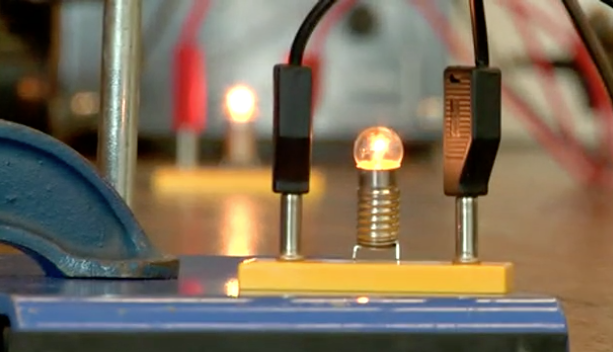 Faraday's law of electromagnetic induction is a very important principle. Most of the electrical power in the world is generated by using this principle.

NB The primary coil must be designed for connection to the mains, e.g. using an IEC connector and mains lead.

This experiment was submitted by K.H. Raveesha, Head of Physics at the CMR Institute of Technology in India.

When an electric current passes through a long, hollow coil of wire there will be a strong magnetic field inside the coil and a weaker field outside it. The lines of the magnetic field pattern run through the coil, spread out from the end, and go round the outside and in at the other end. 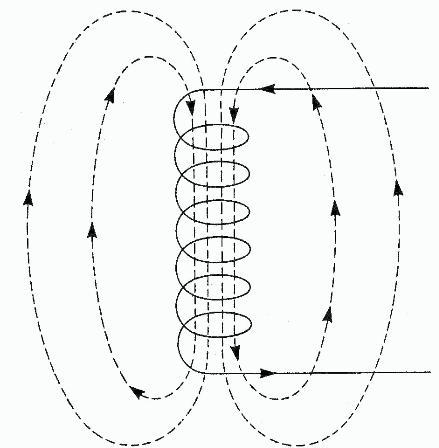 These are not real lines like the ones you draw with a pencil. They are lines that we imagine, as in the sketch, to show the pattern of the magnetic field: the direction in which a sample of iron would be magnetised by the field. Where the field is strongest, the lines are most closely crowded.

With a hollow coil the lines form complete rings. If there is an iron core in the coil it becomes magnetised, and seems to make the field become much stronger while the current is on. 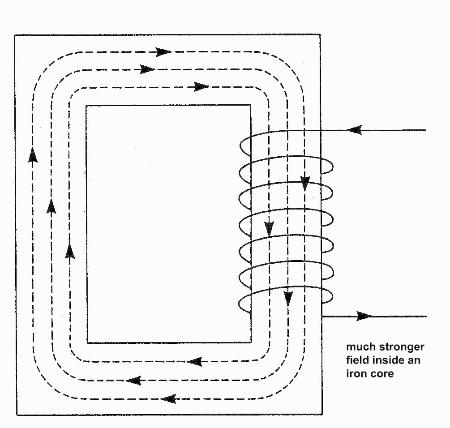 The iron core of a transformer is normally a complete ring with two coils wound on it. One is connected to a source of electrical power and is called the primary coil; the other supplies the power to a load and is called the secondary coil. The magnetisation due to the current in the primary coil runs all the way round the ring. The primary and secondary coils can be wound anywhere on the ring, because the iron carries the changes in magnetisation from one coil to the other. There is no electrical connection between the two coils. However they are connected by the magnetic field in the iron core.

A step-down transformer of 1,200 turns on the primary coil connected to 240 V a.c. will produce 2 V a.c. across a 10-turn secondary (provided the energy losses are minimal) and so light a 2 V lamp.

The iron core is itself a crude secondary (like a coil of one turn) and changes of primary current induce little circular voltages in the core. Iron is a conductor and if the iron core were solid, the induced voltages would drive wasteful secondary currents in it (called eddy currents). So the core is made of very thin sheets clamped together, with the face of each sheet coated to make it a poor conductor. The edges of the sheets can be seen by looking at the edges of a transformer core.