Use this sequence of  practical activities and diagnostic questions to develop your students' reasoning in three-dimensions and understanding of how seasons are caused by changes in sunlight angle and day length.

Many students hold the misconception that its colder in winter because the Sun is further away. This demonstration shows it is the tilt of the Earth’s axis that is responsible.

Attach thermochromic plastic to a globe to show that temperature in the UK depends on whether our hemisphere is tilted towards or away from the Sun.

This demonstration tackles the common misconception that winter happens because the Sun is further away. Compare the UK (55°N) to a similar latitude south of the equator (eg Bouvet Island in the South Atlantic at 54°S) to show that summer in the northern hemisphere corresponds to winter in southern, and vice versa.

Emphasise that you are turning the globe around for convenience. The direction in which the Earth’s rotation axis points doesn't really swap between summer and winter. Which hemisphere is leaning towards the Sun changes because of the Earth’s annual journey around the Sun. 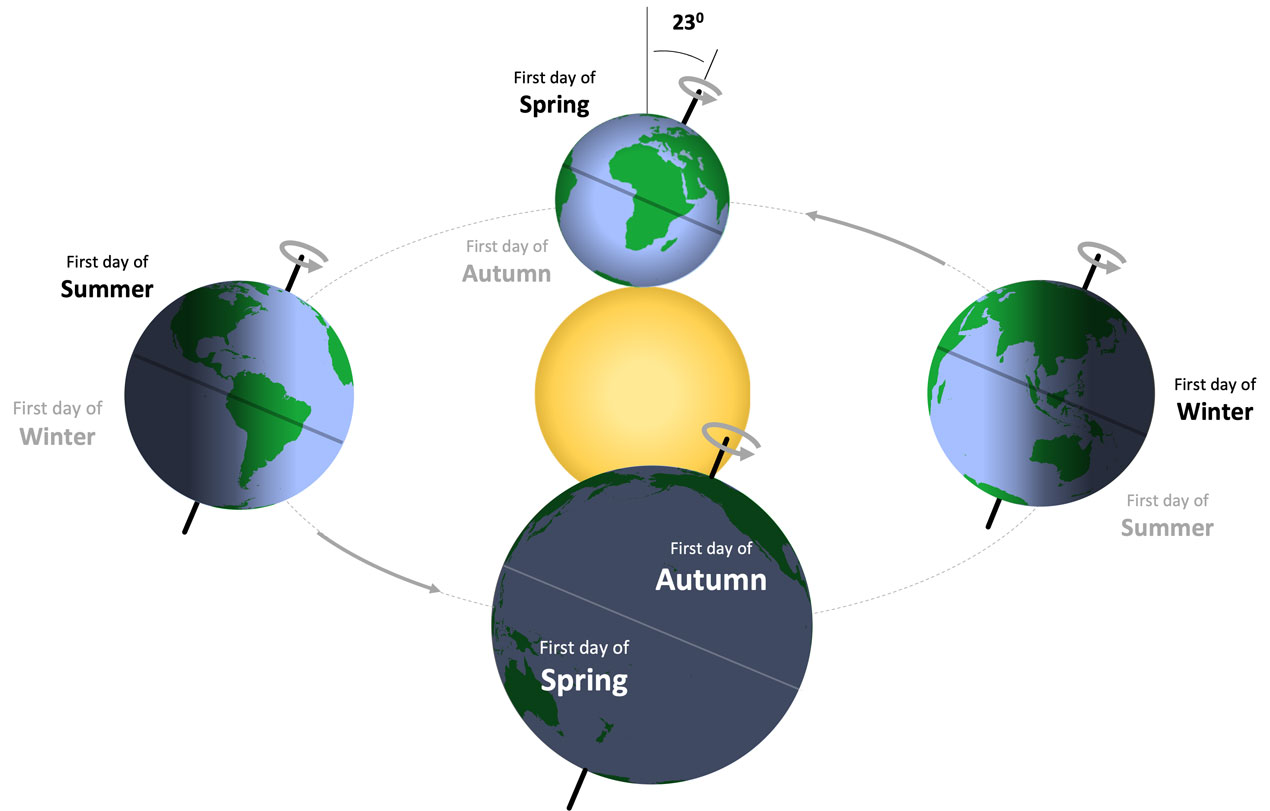 An activity to introduce the idea that it is warmer in summer because the sunlight intensity is higher.

Students model how sunlight spreads across the ground using a torch and tilting board.

Ask the students to:

The light spreads out least when it strikes the board perpendicularly. Some students may think that this corresponds to summer in the UK. Explain why the curvature of the Earth’s surface means that this is not possible. The sun's radiation can only strike the ground perpendicularly in countries near the equator.

To model midday on the first day of summer they should tilt their board to 58°. For the first day of winter in the UK its 12°. It is warmer in summer because the sun's radiation is spread out over a smaller area and so the ground warms up more quickly. 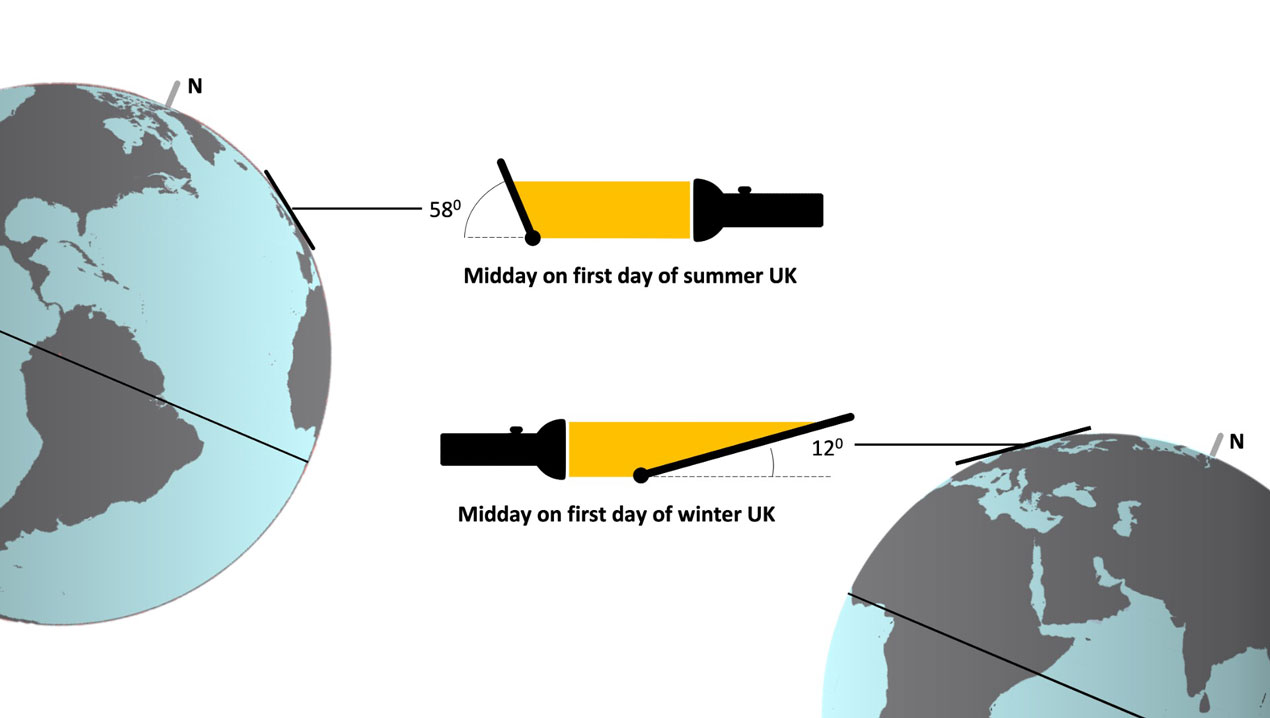 Students explain why the angle with which the sunlight strikes the ground changes over the year and how this contributes to it being warmer in summer.

This experiment was safety-tested in March 2020.

A demonstration to illustrate the second reason it is warmer in summer: the days are longer.

Use a lamp and a transparent dome attached to a globe to show how the path of the Sun across the sky varies over the year.

This activity works best in a darkened room.

This demonstration tackles the common misconception that the path of the Sun across the sky does not vary over a year. Students should see that when the northern hemisphere is tilted away from the Sun (first day of winter in the UK) sunrise to sunset takes less than half a spin, day is shorter than night and the Sun follows a low path across the sky. When the northern hemisphere is tilted towards (first day of summer in UK), the Sun follows a high path across the sky, days are longer than night and it is warmer because the sun's radiation warms the ground for more time.

You could also demonstrate the path of the Sun across the sky on the first day or spring/autumn to show that day and night lasts equal times and the Sun follows an intermediate path across the sky. 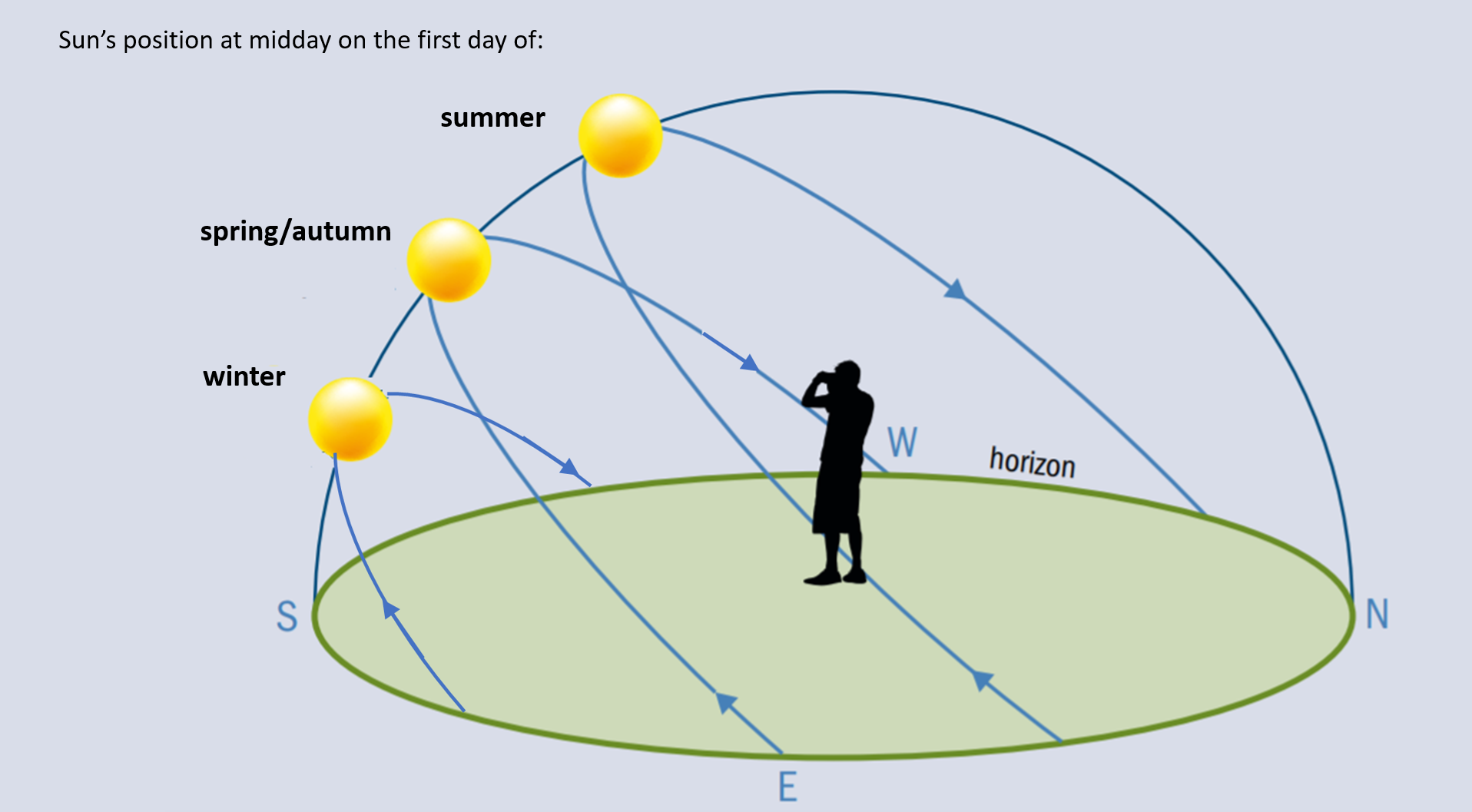 Students explain why days are longer in summer and how this contributes to it being warmer.

An activity to review how seasons arise on Earth and one that challenges students to apply their understanding to new situations.

Students use a ball and stick to model the motion of a planet around a star and deduce how seasons may be different to those on Earth. 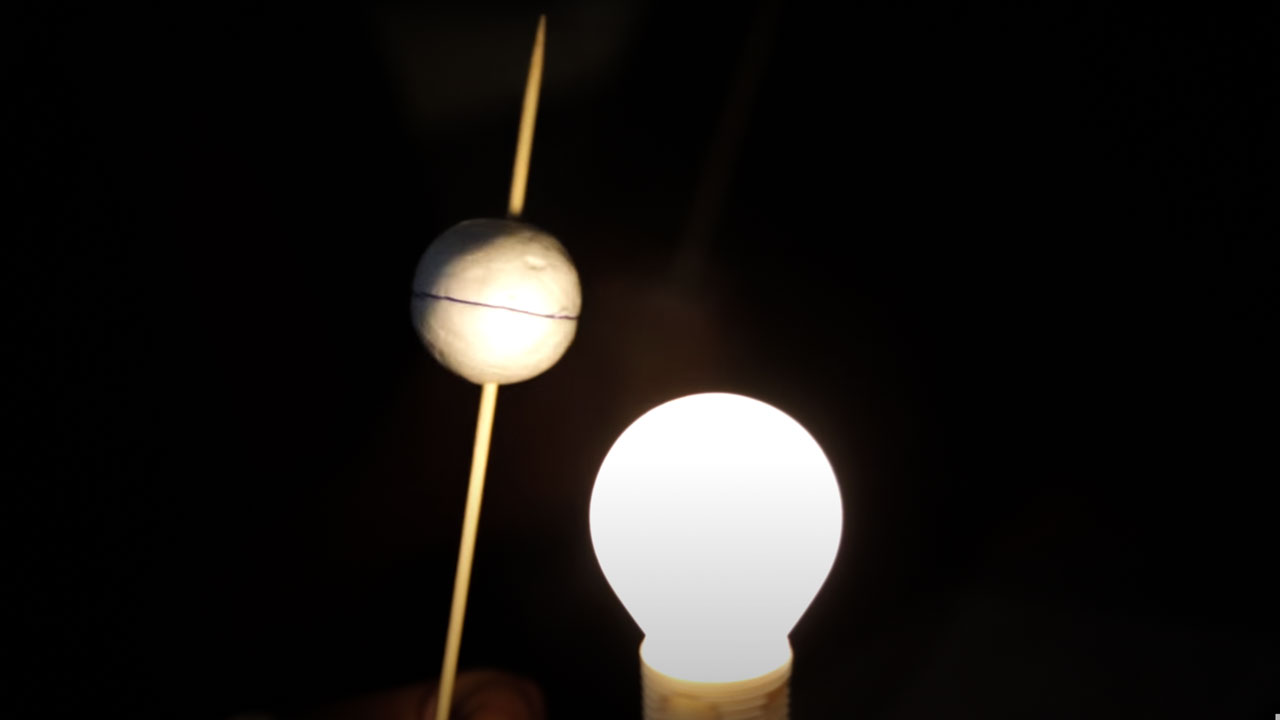 Ask students to be careful when building planets as skewers may be sharp. Warn students not to stare directly into the lamp

If students are unfamiliar with the idea of an exoplanet introduce it. Exoplanets are planets that orbit stars other than our Sun. Astronomers have discovered several thousand and would like to know if any might be home to life.

A planet with a highly elliptical orbit will have seasonal variations, but they would not be like those on Earth. The whole planet will experience the same season at the same time: summer when it is closest to its star and winter when it is furthest away. In the course of a year, its orbit may take it in and out of the ‘habitable zone’ where conditions for life are thought to be most favourable. Life might evolve to hibernate for part of the year, or to aestivate when the temperature is too high.

For a tidally locked planet there are no seasonal variations. Its day is as long as its year. One side of the planet will always be in daylight and hot, the other in permanent darkness and cold. There will be a twilight zone between these two regions which might be a suitable place for life. Alternatively, life might exist beneath the surface.

Students use their understanding of how seasons arise on Earth to predict how they may be different on other planets.

Questions for students to complete individually or for use on the board with electronic or mini whiteboard voting. 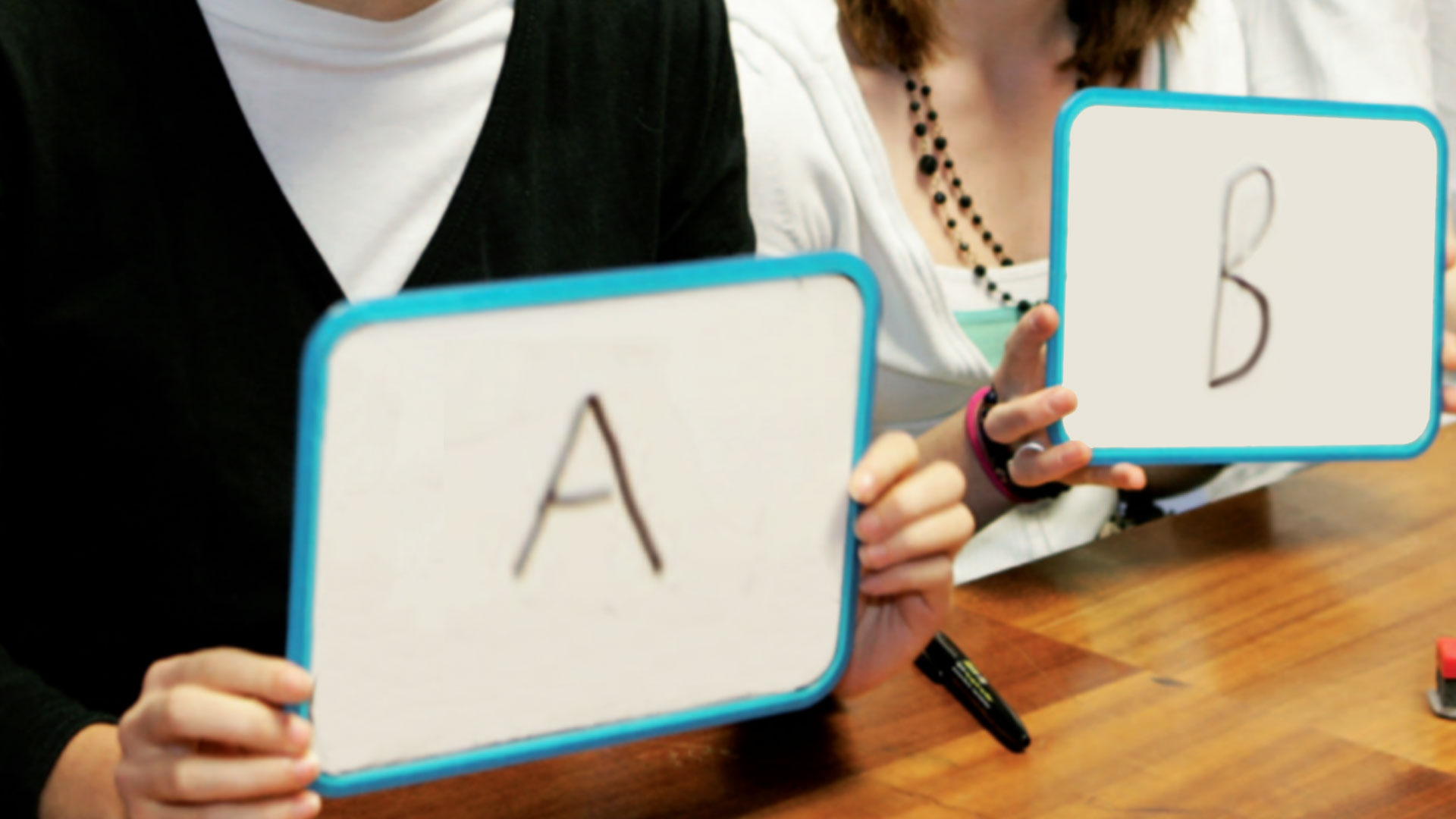 Based on the Best Evidence Science Teaching resource produced by the University of York Science Education Group.

Explore the misconceptions mentioned in this collection and more on the topic of seasons.